Key-words
Bath - Inscription - Lamp - Mosaic - Painting - Sculpture - Cemetery - Sanctuary
Type of Operation
Excavation - Research excavation
Institution
DAI
Toponym
Kerameikos Excavations, Céramique
Linked Record
1988198919901991199219931994199519971998199920002002200420052009201120122013201620192021
Report
Kerameikos. J. Stroszeck (DAI) reports on the 2013 season, which concentrated on the sanctuary of Artemis Soteira – Hekate (as of 2015 identified as the sanctuary of Apollo Paian), the round bath, and the Naiskos of Agathon in the grave plot of Agathon and Sosikles from Herakleia on the Street of Tombs.
Cleaning in the sanctuary of Artemis Soteira-Hekate ahead of restoration works showed that two sections of wall 1 were joined at their intersection by a layer of rubble, on which two limestone steps are apparently part of a narrow stair access leading from a higher level to the inner part of the sanctuary.
A monument foundation at a protrusion in the south wall of the sanctuary (walls 8-10) was composed of conglomerate blocks on a rubble base. The overlying monument consists of a rectangular block with a broad groove in the upper surface which, because of its north-south orientation, may be a sundial.
Investigation of the older and lower-lying wall 4 (previously sketched by A. Brueckner), proved that its lower part is ancient and identical with the older, southern part of the enclosing wall of the grave of Lysimaches of Acharnai on the Street of Tombs. The lower-lying wall 3 belongs to a Classical grave plot, continued under the Hellenistic grave plot of Isthmonikos of the deme Berenikidai, whose west wall is identical with wall 3 of the sanctuary and dates to Imperial times.
Work in the undocumented western part of the north wall of the temenos (wall 6) established that - as with walls 1, 2 and 3 - this is an enclosure wall of an older grave plot, which, when the sanctuary was renovated, became the temenos boundary. A stone door sill, found in situ, enabled access to the grave plot from the south.
Round bath in front of the Dipylon
Further documentation of the water supply of the public bath in front of the Dipylon focused on cisterns Z20 and Z22, excavated in 1936-1937 and 1967-1969. The smaller cistern Z22 is in fact a flat basin without a drain, which probably served as a sedimentation tank for a Hellenistic potter’s workshop constructed over parts of the round bath. The second ‘cistern’ Z20 is a well which was repaired and altered many times. The mouth of the well was installed during the fourth century BC and probably remained in use until the sixth century AD. At a depth of 5.2m, far below the ground water table, lay four fragments of two marble portraits of a girl and a young woman. They both have the same hair style, introduced by Salonina, wife of emperor Gallienus (260-268 AD). The damage to the heads suggest that they were knocked off statues. The layer in which the portraits were found contained a mould for a clay lamp from the workshop of Leonteus, a series of sherds with Christian symbols, a fragment of a Christian epitaph of the fifth to sixth centuries AD, and the remains of a glass workshop which produced mosaics. An abundance of complete ladles and amphorae document intensive use of the well from the fourth to the beginning of the fifth century.
During a fourth-century AD destruction, a large limestone block with deep rope grooves toppled from the brim into the well. In this layer were several vessels with graffiti, among which was a jug with an owner’s inscription of one Apollonios.
Naiskos of Agathon
Continuated restoration work found remains of red colour at the rear wall of the Naiskos. A new protective roof for the front wall of the grave has been built.
Author
Robert PITT
Bibliographic reference(s)
DAI Unpublished Report
Date of creation
2014-07-04 00:00:00
Last modification
2021-08-27 08:22:08
Picture(s) 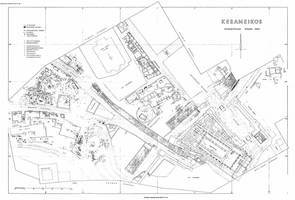 Fig. 1/ Kerameikos. Plan with areas under investigation in 2013. 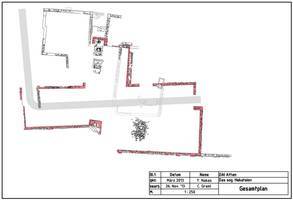 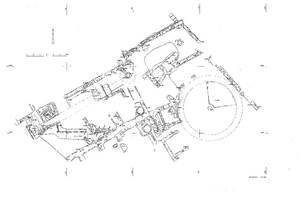 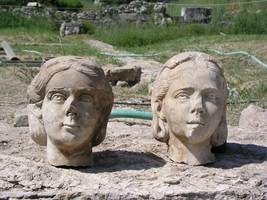 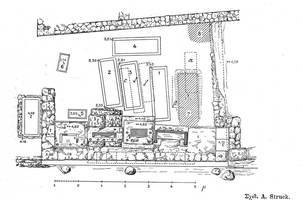 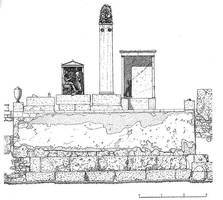