Key-words
Tomb - Stoa - Inscription - Numismatics - Public area
Type of Operation
Excavation - Research excavation
Institution
ASCSA
Toponym
Agora antique, Athenian Agora
Linked Record
2006200720082008 (1)20092010201120122013201420152016201720182019
Report
Athenian Agora. J. Camp (ASCSA) reports on the 2013 season:
In Section ΒΘ east (Fig. 1), a small trial trench in front of the Stoa Poikile (Fig. 2) encountered sixth-century AD fill beneath Middle Byzantine levels of ca 1000 AD. A large inscribed statue base of Hymettan marble (Figs 3, 4) embedded in this fill measured 0.64m across the front, 0.5m in height and 0.32m from front to back, and preserves an oval cutting for the attachment of a marble statue. Eight lines of text in letters ca. 0.03m high are preserved:
ΕΠΙ ΠΟΛΥΧΑΡ<Μ>ΟΥ ΤΟΥ ΕΥΚΛΕΟΥ[Σ]
ΜΑΡΑΘΩΝΙΟΥ ΑΡΧΟΝΤΟΣ ΚΑΙ ΙΕ[Ρ-]
[Ε]ΩΣ ΔΡΟΥΣΟΥ ΥΠΑΤΟΥ ΛΕΟΝΤΙ-
[ΔΕ]ΩΝ ΟΙ ΜΕΤΕΧΟΝΤΕΣ ΙΔΡΥΣΑ[Ν]
5 ΤΟ ΝΕΟΝ ΗΡΩΑ ΕΥΚΛΗΝ ΗΡΩΔΟ[Υ]
ΜΑΡΑΘΩΝΙΟΝ ΤΑΜΙΕΥΟΝΤΟΣ ΔΗ-
ΜΗΤΡΙΟΥ ΤΟΥ ΑΝΤΙΟΧΟΥ ΧΟΛΛΕ-
[Ι]ΔΟΥ
‘When Polycharmos, son of Eukles of Marathon, was archon and priest of Drusus Hypatos. Those of [the tribe of] Leontis(?), sharing, set up the new hero, Eukles, son of Herodes of Marathon, Demetrios son of Antiochos of Chollidai being the treasurer.’
Drusus, the brother of Tiberius, died in September 9 BC, and soon thereafter the eponymous archon in Athens began to carry the title and duties of the priest of the cult of the deified Drusus. Polycharmos seems to be the son of Eukles, the individual being honoured who was the son of Herodes of Marathon. He was a well-known civic leader, serving as archon in 46/5 BC, priest of Apollo repeatedly between 42 and 10 BC, and hoplite general, and was an ancestor of Herodes Atticus. The block has been reused and wherever the original top is preserved around the oval cutting for the statue, traces of some 37 Late Classical or Hellenistic lines of letters are visible. The discovery of this base, together with a military monument found two years ago, seems to confirm that the area in front of the Poikile was regarded as highly desirable for significant commemorative monuments.
A second trial was opened just south of the midpoint of the Stoa. A marble block was revealed (0.2m thick and 1.5m long) with an edge heavily worn by foot traffic (Fig. 5). Its orientation and level indicated that it was the side of one of the cover slabs which overlay the north channel of the Eridanos river. A camera placed into the channel revealed reused blocks including a gravestone with carved rosettes (Fig. 6). The fill was consistently Late Roman, suggesting that the ground level in front of the Stoa was kept deliberately low throughout antiquity.
In Section ΒΘ west, Middle Byzantine levels continued to be explored (Fig. 7). Pottery and anonymous folles (976-1034 AD) indicate that the area was particularly busy in the years around 1000 AD. Rubble walls – incorporating much earlier material – packed earth floors, and the occasional pithos match the appearance of this settlement across the entire area north of Hadrian Street.
In Section ΒΓ investigation continued of the Panathenaic Way and around the perischoinisma. At the extreme east end of the section, the northernmost corner block was exposed - the sixth found in situ along the north side of the enclosure. To the south, excavation around the eastern base revealed that the block was deeply embedded in the road. A well-defined footing trench was found along the east and south sides of the block (Fig. 8). The road levels suggest that the bases were installed sometime in the second quarter of the fifth century BC. A terminus post quem for the abandonment of the perischoinisma was a layer with a piece of black-glazed stamped ware, suggesting that it went out of use no earlier than ca 430-420 BC. As it now appears, the enclosure runs across the full width of the Panathenaic Way, though on a seemingly unrelated orientation. Its position spanning the road and its fifth-century date suggest that it was used for some sort of crowd control, e.g. during ostracism.
In Section ΒΖ, early levels to the north, behind and under the Classical commercial building, consisted of hard-packed fills with fragmentary high quality Archaic pottery. In one enigmatic pit, into which a sixth-century BC wall had been inserted (Figs 9 and 10), produced two Mycenaean goblets (Fig. 11) and three stone spindle whorls (Fig. 12), indicating the presence of at least one disturbed Mycenaean tomb in the area. Lower down, the fill contained numerous bone fragments of adult and child, suggesting that the pit itself may represent the collapse of the central chamber of a tomb originally cut into the surrounding fill.
Author
Robert PITT
Bibliographic reference(s)
ASCSA Unpublished Report
Date of creation
2014-07-04 00:00:00
Last modification
2020-02-17 11:20:07
Picture(s)

Fig. 1/ Athenian Agora. Plan of the Classical and Archaic remains in the areas excavated in 2013.

Fig. 2/ Athenian Agora. Trial trench in ΒΘ East showing the top of the statue base.

Fig. 3/ Athenian Agora. Top of the statue base of Eukles. 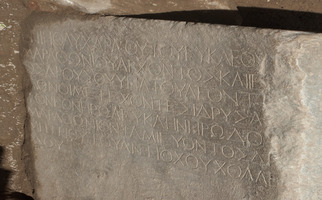 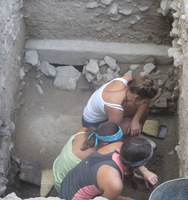 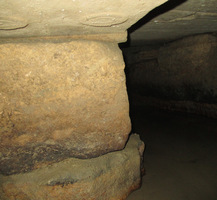 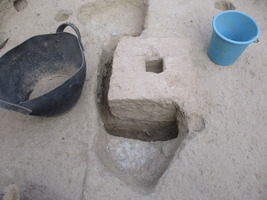 Fig. 8/ Athenian Agora. Stone posthole from the perischoinisma, showing the footing trench for its installation. 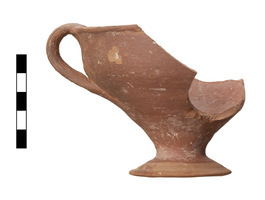