Key-words
Inscription - Production/extraction site - Road system/waterway - Find Type - Site Type
Type of Operation
Survey
Institution
BSA Unpublished Report
Toponym
Kenchreai
Linked Record
2013201420152016
Report
Kenchreai Quarries Survey. C. Hayward (Edinburgh) reports on the first season of intensive pick-up survey in the ancient quarries of Kenchreai, conducted to identify the periods of quarrying and the types and locations of post-quarrying activity. Building upon his earlier close study of these quarries, the results of this combined archaeological and geoarchaeological survey will for the first time permit a holistic understanding of a major Greek quarry complex, the material culture of stone extraction, the subsequent use of the space, and its integration into local and regional historical and cultural contexts.
The study area comprised the two quarry complexes (A and B) plus a 100m-wide zone around the quarried areas. The quarries are mostly a series of small, shallow pits. Some represent stone extraction over short periods (possibly for single projects), which should enable (uniquely within the Corinthia) close dating of quarrying activity at certain locations. Relatively undisturbed by modern activity, they preserve the deposition/formation processes operative in each area, and enable discrimination between material in primary (or close to primary) deposition and linked to a period of quarrying, and that redeposited during quarry operation in the immediate area (e.g. in clearance of debris), or deposited after quarrying had ceased. The survey methodology was designed to accommodate low artefact density in quarry interiors, differences in land use during quarrying and thereafter over a period in excess of a millennium, and scales of activity from individuals and small work gangs to domestic groups and agricultural activities.
Quarry pit interiors and a 10m margin around them were covered in 10m-wide strips by walkers spaced 2m apart. All visible artefacts were collected, numbered and located on quarry plans prepared from Hayward’s geoarchaeological study. Distinct artefact scatters were recorded and collected as discrete features, thus maximising spatial information about artefact distribution. Initial study indicates a common association between ceramic deposition and quarry edges or quarry debris; multiple joins between sherds within scatters irrespective of date, thickness or hardness of firing (generally with old breaks and differential weathering); and different structures of assemblage (tile plus storage vessel plus cups, for example, or single thin-walled cups, the latter often at quarry edges). It is thus likely that pottery can be associated with specific quarry activities and a spatial model of ceramic use developed. A large ploughed field lies within Complex A between two lines of quarry face, and may itself represent a series of buried quarry pits. This was divided into 5x5m squares and a total artifact collection made to facilitate comparison between this ploughzone assemblage and assemblages from the uncultivated quarry pits. Finally, in order to identify activity in the near vicinity of the quarry pits, whether related to stone quarrying or to post-quarrying activities, a zone up to 100m from the edge of the quarry pits was sampled in 25x25m squares walked at 5m spacing: artefact recovery was thus approximately 20% for each line walked.
Preliminary evidence indicates that activity in both complexes dates from the fifth century BC (when a significant amount of Attic black-glaze marks a shift from rare earlier Archaic sherds) to the fifth century AD, declining thereafter through the sixth and seventh centuries. The Classical date accords with the reference to the Kenchreai quarries as a stone source in the Epidaurian building inscriptions (IG IV2 103. 40-41).
Preliminary study of ceramics (3471 finds from 61 collection units) focused on two areas – the so-called inscribed quarries and the ploughed field. In 2012, Hayward located two inscriptions, apparently made by contractors or masons, in a series of small linked quarry pits at the western end of Complex B. These are the first inscriptions related to quarrying activity found in the Corinthia. Examination of quarry faces during the 2013 season revealed a further four inscriptions in the same area, also probably by contractors and/or masons. Most were deeply carved and in large letters. The general lettering style is of the Roman Imperial period: the names are all very rare and the onomastics suggest a probable date around the first to second centuries AD. The longest text reads:

ΝΥΜΦΑC
ΕΠΟΙΕΙ
ΠΛΗΡΑΝΤΕΙ
‘Nymphas made (this) complete’
This inscription (letters 0.10-0.14m) was carved with a point-ended pick – the same tool used in quarry-related stone cuttings on adjacent stone surfaces - suggesting that Nymphas was a contractor and/or a stone mason. Others also appear to record names of contractors or stone workers responsible for areas of quarrying, and differentiation of hands suggests that individuals, rather than any authority, carved them.
The earliest identified material from the inscribed quarries consists of a few Argive and Attic black-glaze sherds dating from the late fifth century onwards. This area produced one of the largest ceramic collections in the complex, with the largest shape range (fine tableware, cookware, tile, pithos and amphora) and chronological span. Peaks occurred in the Classical-Late Hellenistic/Early Roman and Middle-Late Roman periods, with a small late 16th- to 18th-century presence. The area immediately to the south contained nearly the same volume of material, but with a more consistently Roman-Late Roman chronological profile and a more limited shape range (mostly tile, pithos and amphora). The majority of finds from the inscribed quarries date to the Roman period: the main pottery forms are thin-walled drinking cups approximately contemporary with the preliminary date of the inscriptions. Fragments of these cups appeared across the area, but especially in the northern part where six main clusters within the quarry pit and on the unquarried edges are sometimes associated with other fineware or water storage vessels. Tiles and pithoi are quite common, appearing in clusters, mostly free of drinking cups, which may indicate the locations of structures near the quarry edges. Five cooking vessels were identified, including two Early Roman examples associated with tiles and pithoi. Post-quarrying occupation is represented by an early modern building immediately to the southwest of the inscribed quarries: a scatter of finds from this structure extends northwards and includes late 16th- to 18th-century monochrome glazed and unglazed domestic sherds.
The ploughed field within Quarry Complex A yielded a high density of ceramics. Preliminary examination of c. 1/5th of this material (some 4000 sherds and 284 tile fragments) revealed a preponderance of cooking and transport vessels and imported fine tablewares of largely Middle-Late Roman date. Settlement activity was contained within the field, and significant discrepancies in sherd density observed within it. The quality of the data set collected will support close spatial analysis of the chronological development of the settlement, the location of functions represented by vessel types, and comparison of the assemblage with that selected for use within the quarries. The earliest identifiable pottery is Archaic, but Archaic-Hellenistic sherds are rare on present evidence. Early Roman finds are more common, including cooking pots, jugs and several Brindisian and Northern Aegean (possibly Thasian) amphora sherds. The vast majority of finds are Late Roman. Lamps of Broneer’s Types XXVII and XXVIII (second- to fourth-century) were relatively common, as were Late Roman (fifth- to sixth-century) cooking pots and LR 2 amphorae. ARS and LRC Ware imports (Hayes Form 3) and imitations are thus far the most commonly identified table vessels, strongly suggestive of sixth-century activity.
Significant numbers of lithics (blades, scrapers, cores and working chips, and flakes) were found in all parts of Complex A wherever vegetation was moderate, with many tools showing evidence of retouching. One particular concentration of finds represents the entire production process, including cores (some used to their maximum extent), working flakes and finished tools mostly of red chert, with a lesser number of banded and grey chert. A small number of blades of obsidian or pitchstone were also recovered. The source(s) and date(s) of these tools will be the subject of further study.
Ancient roads identified during the 2013 season and in Hayward’s previous studies suggest that stone from the Kenchreai quarries was also transported to Isthmia and other Corinthian locations. In 2013, two short sections of wheel rut were observed in the northern part of Quarry Complex A. In one case the rut width indicates a relatively heavy vehicle and perhaps the carting of stone blocks, while on a nearby bedrock outcrop a series of narrow, shallow ruts is suggestive of the relocation of narrower gauge wheels to obtain the best purchase. In neither case was the opposite rut exposed, precluding measurement of the axle gauge.
Post-quarrying occupancy of quarry pits was traced in several locations. In the central part of Complex A, a series of collapsed structures within and immediately outside the adjacent quarry were represented by significant piles of rubble and a range of (probably Late Roman-early modern) roof tiles, of which nine distinct types were identified by visual inspection. In the northern part of Complex A, well-rounded pebbles polished on one face and with mortar on the other likely represent a floor surface laid within the quarry, possibly within a domestic space. A further example, which could also be contemporary with a period of quarrying, is a door threshold cut through the thin wall of bedrock remaining after the extraction of stone blocks from adjacent areas. The feature is hard to date given the scarcity of ceramics from this location.
Author
Catherine MORGAN
Bibliographic reference(s)
BSA Unpublished Report
Date of creation
2014-06-30 00:00:00
Last modification
2018-08-22 09:24:43
Picture(s)

Fig. 1/ Kenchreai Quarries Survey, coverage of the study area during the 2013 field season, locating some of the main finds and features.

Fig. 2/ Kenchreai Quarries Survey, location of Quarry complexes A and B and total study area. 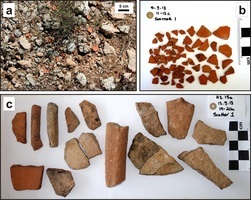 Fig. 3/ Kenchreai Quarries Survey, a typical scatter of thin-walled cup sherds (a) prior to collection and (b) after washing; a scatter of primarily Late Roman sherds showing joins and differential weathering (c). Fig. 4/ Kenchreai Quarries Survey, example of an inscription from the 'inscribed quarries' in Complex B.