Key-words
Domestic space
Type of Operation
Excavation - Research excavation
Institution
BSA
Toponym
Palaikastro, Roussolakkos
Linked Record
201320142015
Report
Palaikastro. C. Knappet (Toronto), N. Momigliano (Bristol) and A. Livarda (Nottingham) report on the second season of the Palace and Landscape at Palaikastro (PALAP) project in 2013, which focused on exploration of a new area of the settlement. (Fig.) The so-called ‘palace fields’ were thus named following a 2001 geophysical survey which indicated possible buried features of a scale and alignment consistent with a palatial building. With further geophysical work in 2012 apparently confirming the interest of the area, excavation zones were selected accordingly. However, the geophysical results proved to be misleading, and the areas of most promise revealed little but deep, gradual accumulations of colluvium. The sporadic finds in these levels are generally of mixed date, though with increasing depth they become gradually earlier from Late Minoan III, through Late Minoan I, to early Middle Minoan. These deposits were probably created by a gully which carried water down the steep slopes of Petsophas, perhaps in flash-flood events. It would have been logical to conclude that this gully then marked the edge of the settlement, but excavation a little further to the east, away from the town, produced both architecture and finds from the Late Minoan III and Late Minoan IB periods immediately beneath the topsoil. These discoveries indicate that the settlement was indeed more extensive than previously imagined, though further excavation will be needed to establish whether this area is the eastern edge of the town or a less peripheral area with possible civic buildings. Finds include a group of Late Minoan IIIA2-B material that could be interpreted as a shrine (Fig.); the collapsed upper levels of a Late Minoan IB destruction event; and an enigmatic curving feature which probably dates to the Protopalatial period.
Author
Catherine MORGAN
Bibliographic reference(s)
BSA Unpublished Report
Date of creation
2014-06-30 00:00:00
Last modification
2021-02-23 21:05:12
Picture(s) 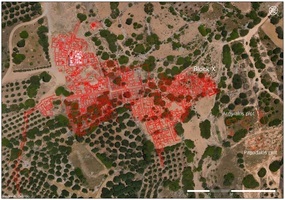 Fig. 1/ Palaikastro, plan of the town showing the new excavation area to the southeast (Argyrakis and Papadakis plots). 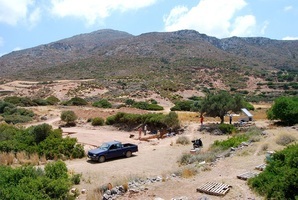