Key-words
Agricultural facility - Building Type
Type of Operation
Excavation - Rescue excavation
Institution
ΛΣτ' ΕΠΚΑ
Toponym
Nafpaktos
Linked Record
20002005
Report
Palaiopanagia, Naupaktos (property of K. Mavromyti). V. Staïkou (ΛΣτ’ ΕΠΚΑ) reports the discovery of a Roman farmhouse on the west edge of Naupaktos, ca. 100m south of the Naupaktos-Antirrion road. Parts of two buildings were explored, oriented northeast-southwest and entered from the south, which continued northwards beyond the excavated area. The southern building, which belonged to the older construction phase, was partially destroyed: a newer building constructed on the site had a pair of wine presses and vats. The walls of the building and cisterns were of local fieldstones, river pebbles and fragments of brick. The almost complete absence of tiles may indicate that the building was roofed with perishable material. Wine production is confirmed by the discovery of an extensive layer to the south of the buildings containing grape seeds.
The presses were side by side. That to the east was the larger (internal length 2.43m) and that to the west the smaller (1.58m in length). Both presses and vats were lined with a thick layer of pink hydraulic cement, and connected by terracotta pipes. The rectangular vats were accessed via steps on the south side, while a pair of slabs was set into the east and west sides to facilitate descent. The eastern vat had internal dimensions of 1.3 x 1.05 x 1.25m, with walls 0.5m thick: a shallow hollow in the centre of its floor served to hold heavier fractions as they settled. The western vat measured 1.2 x 0.8 x 1.14m, with walls 0.4m thick: the centre of the floor was covered with tile fragments.
Very little diagnostic pottery was recovered, making it difficult to date these structures. The two buildings probably belong to a larger Late Roman complex, the remains of which have been located just to the north.
Author
Catherine MORGAN
Bibliographic reference(s)
ADelt 60 (2005) Chr. 481.
Date of creation
2014-06-30 00:00:00
Last modification
2018-08-22 09:24:43
Picture(s) 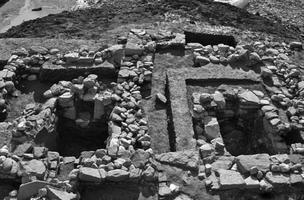