Key-words
Lamp - Mosaic - Sculpture - Domestic space - Find Type - Site Type
Type of Operation
Excavation - Rescue excavation
Institution
ΛΣτ' ΕΠΚΑ
Toponym
Nafpaktos
Linked Record
2005
Report
Naupaktos, 1st Public School. Ph. Saranti (ΛΣτ’ ΕΠΚΑ) reports the discovery of a Roman complex with two separate buildings. The west building, probably a house, was founded at a higher level, with walls of unworked stones, brick and tile, as well as re-used earlier material.
The east building contained at least 12 rooms which continued beyond the excavated area to the north and south. The east side of the building was bounded by a buttressed wall, while the north side likely lies beneath Mavromati Street, where a buttressed wall was previously revealed in excavation for a pipeline. The walls (preserved to a height of 2.1-2.37m) were in opus mixtum with a superstructure of unworked stones in a thick cement packing. The building was constructed in the second century AD (the floors of this phase are generally preserved at a depth of ca. 2.48m). In the Late Roman or Early Christian period (probably during the fourth century AD) it was completely remodelled: room interiors were filled in, floor levels raised and the original doors put out of use. The function of the building likely changed, though finds confirm its continuing secular role. The superstructure of this later phase does not survive, though there are remains of the tiled roof. The final destruction of the building is dated to the sixth century by Early Christian lamps in the destruction deposits, and may have been due to the earthquake of 551AD (which may also have destroyed the city’s fortification and Early Christian basilica). This may be confirmed by vertical cracks right through two walls. Excavation of deeper levels produced Archaic to Hellenistic pottery and building remains.
Most rooms in the east building had poorly preserved mosaic floors (or the bedding for such floors), decorated exclusively with the geometric motifs characteristic of Early Christian floors from the end of the fourth century onwards. Several rooms had traces of earlier floors: the best preserved, in rooms 1 and 5, had geometric motifs separated and in zones, with polychromy. Floor mosaics were also preserved in rooms 4 (a central motifs of large solid circles alternating with diamonds), 6 (diamonds with contiguous cross shapes), and 9 (squares arranged radially around an octagonal medallion). The floors in rooms 5 and 6 have not yet been completely exposed. The most significant finds came from room 3β (4.66 x 4.75m internally), where the final destruction layer contained numerous fragments of marble wall revetment and cladding (opus sectile decorated with bands of white and green marble alternating with a wave motif in soft limestone), and pieces of limestone wall decoration (crustae), noting that the walls bore incised guidelines for their placement. At floor level, beneath the collapsed roof was part of an unfluted column and fragments of sculpture (the lower part of the hand of a life-sized figure holding an omphalos phiale with a relief head in metal, a headless statuette of Aphrodite or a nymph, the head of a male statuette, two sections of the feet of a male statuette, and a small column with a snake coiled around it which is likely the support for a statuette of Asklepeios).
There is no evidence to establish the function of the building in any phase, though most of the rooms were not excavated to their full extent. It lies in an important seaside area of Roman Naupaktos, next to rich natural springs, where sections of large and small bath complexes as well as private villas have been found around the seaside branch of the Classical and Hellenistic city wall. Over the years, a number of architectural members (columns, capitals, epistyle fragments, sundials etc.) have been found around the school building, probably from the monumental city baths, while floor mosaics have also been found in the course of public works on Apokaukou Street.
Author
Catherine MORGAN
Bibliographic reference(s)
ADelt 60 (2005) Chr. 478-80.
Date of creation
2014-06-30 00:00:00
Last modification
2018-08-22 09:24:43
Picture(s) 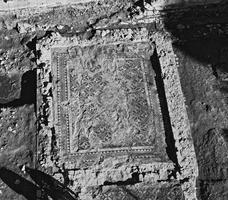 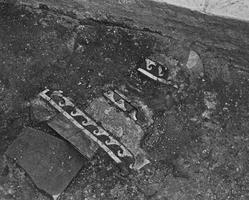