Key-words
Figurine - Lamp - Numismatics - Dress and personal ornament - Metal - Cemetery - Find Type - Material Type - Site Type
Type of Operation
Excavation - Rescue excavation
Institution
ΛΣτ' ΕΠΚΑ
Toponym
Nafpaktos
Linked Record
20002005
Report
Naupaktos, West Cemetery. Ph. Saranti (ΛΣτ’ ΕΠΚΑ) reports the discovery of further tombs.
On Mesolongiou Street (Arvaniti property), six Late Archaic, Classical and Early Hellenistic tombs were discovered. Tombs I, II and V were cist graves built of cover tiles, while III, IV and VI were pits. Tombs III and IV were child graves covered by single tiles (as is commonly found in this area). Most graves were robbed or disturbed. Tomb IV contained two miniature lekythoi and a female figurine wearing a polos, and is Late Archaic in date. Tomb VI contained eight vases, a female figurine wearing a polos, and a bronze necklace: it is Late Archaic-Classical in date. The Early Hellenistic tomb V contained a kantharos, a one-handled kyathos, a pyxis, a bowl and a lamp. In the centre of the plot was a mound of medium-sized and small stones with no consistent arrangement or connection with the cemetery: this contained a little Late Roman pottery.
At Alonaki (Lyberi property), the northernmost part of the cemetery was discovered (a continuation of the area investigated on the Lyberi-Paralika property in 2004). Nineteen tombs of different forms were set into hollows in the bedrock, and were mostly badly disturbed. They extended along the south slope of a low hill and along the main road which probably led to Thermon: while the road itself was not located here (as it was on the neighbouring plot), its existence is confirmed by the arrangement of these well-built tombs along the east extension of its north side.
Six Geometric pithos burials provide the first indication that the cemetery was in use at this time. The pithoi, which were variously set upright and on their sides, formed a loose grouping in the eastern part of the plot, into which later burials were cut. Pithoi 3, 5, 9 and 10 of the second half of the ninth to late eighth century, were the best preserved: they contained a significant number of pottery vessels (both fine and handmade, mostly local but with Thapsos class imports) plus small finds (bronze rings, beads, bracelets and pendants, and a small number of gold ornaments).
The remaining tombs (mostly cist and tile graves) date from Late Classical to Roman times. In the western part of the plot, a Macedonian tomb (4.8 x 4.1m) consisted of two chambers of equal size (1 x 1.8m), plus an antechamber (1.1 x 3m) with plaster on the interior, entered from the south (i.e. from the road). Although this monument had been looted, the structure was well preserved (the south chamber, for example, retained its monolithic door). Around it was a Π-shaped peribolos of well-cut stone blocks. Close to the monument was a large cist grave (tomb 6) with a roughly-built Γ-shaped peribolos around it. The grave, which was intact, contained at least five burials and a large quantity of offerings, including 42 well-preserved vases, a bronze mirror disc, gold earrings, gold fittings from a necklace or bracelet, gold beads, bone attachments, silver coins and a lead pyxis. These finds confirm that the tomb was used over a long period from the late fourth to the second century BC.
The Late Classical cist tomb 5 contained three burials and eight vases, including a pair of red-figure bell kraters.
Author
Catherine MORGAN
Bibliographic reference(s)
ADelt 60 (2005) Chr. 475-7.
Date of creation
2014-06-30 00:00:00
Last modification
2018-08-22 09:24:43
Picture(s) 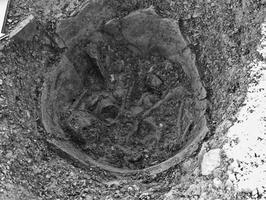 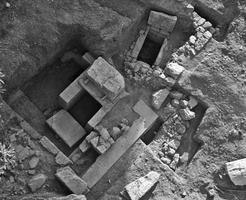 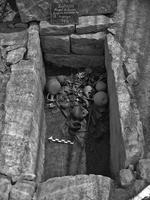 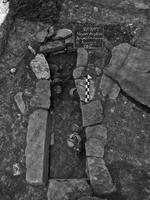