Key-words
Tools/weapons - Dress and personal ornament - Metal - Cemetery - Find Type - Material Type - Site Type
Type of Operation
Excavation - Rescue excavation
Institution
ΛΣτ' ΕΠΚΑ
Toponym
Kryoneria
Linked Record
2005
Report
Spilies, Kryoneri (property of Ph. Gourgolitsa). M. Stavropoulou-Gatsi (Director emerita, ΛΣτ’ ΕΠΚΑ) reports the discovery of Archaic tombs on a rocky, sloping site just outside Kryoneri, facing onto the local road from Kryoneri to Galata, in the lower foothills of Mt. Varasova. Following the discovery of a pithos burial during cleaning of the plot, excavation revealed five pithos burials and two pit graves in the upper, northern part.
Pithos I (1m in diameter) was set upright on the ground surface: half destroyed, it contained the bones of at least five individuals mixed together (only one adult burial in contracted position could be distinguished). Grave goods, which date the tomb to the Late Geometric-Early Archaic period (late seventh to early sixth century), comprised three aryballoi, a shallow two-handled vessel, two phialae (one pottery and one bronze), a bronze horse figurine on its base, an iron sword, a long curved metal sheet, bronze beads, and 17 bronze rings (many of which were found on the hands of the deceased).
Pithos II (0.45m in diameter) contained an infant burial in contracted position. Pithoi III, IV and V had been robbed and contained no offerings. Pit grave VI contained the bones of at least one inhumation with placed with the head to the east, while pit grave VII contained no goods but the bones of two individuals, one of which had been laid supine with the head to the west.
Test trenches in the lower, southern part of the plot revealed a layer with remains of a stone mound with a rich collection of decorated seventh-century pottery, a terracotta loomweight and six stone tools (including rubbers and a whetstone). No architectural remains or evidence of further tombs were found. In the western part of the plot, unworked stone blocks were found in an arrangement suggestive of an east-west retaining wall.
Author
Catherine MORGAN
Bibliographic reference(s)
ADelt 60 (2005) Chr. 473-4.
Date of creation
2014-06-30 00:00:00
Last modification
2018-08-22 09:24:43
Picture(s) 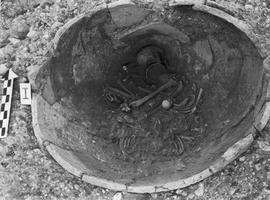