Key-words
Figurine - Numismatics - Tools/weapons - Public area - Domestic space - Road system/waterway
Type of Operation
Excavation - Rescue excavation
Institution
Η’ ΕΠΚΑ
Toponym
Chrysavgi, Veliani
Linked Record
1988199219932005
Report
Anc. Elea. G. Riginos and K. Lazari (Η’ ΕΠΚΑ) report on excavation of buildings in the central (flat) part of the site and of sections of ancient roads which will form part of planned visitor access routes to the site.
Building 4 lies north of the main street, by the junction with the street which defines the west side of the agora. A rectangular structure (30 x 10 m) with three rooms, its west and south sides are best preserved. The main entrance, from the street to the west, led into a central corridor with a room on each side: a storeroom on the south side contained three pithoi beneath a thick destruction layer, while the room on the north likely contained a loom, since 80 loomweights were found (as well as an Adriatic transport amphora).
Building 5 lies on a road which ran northwest to southeast across the level central area, to the north of building 4. Similar in construction to building 4 (with exterior walls in polygonal masonry and a fired brick superstructure), it too is probably a private house. At least four rooms were uncovered in the western part of the building (an area of 13 x 10m). The main entrance, in the northwest side, gave into a long, narrow room (I) which had four pithoi set along its west side. A terracotta bathtub in the southeast corner drained via a stone channel into the neighbouring alley. A dense destruction deposit contained bronze coins, iron nails and pins, small bronze and iron items, and sherds of pithoi and pithoid vessels. Rooms II and IIII lay to the east of I: the northernmost (room II) contained storage vessels. To the south of it, room III had a semicircular hearth in the southeast corner and a large storage pithos in the northwest corner. A collection of 29 conical and pyramidal terracotta loomweights in the middle of the north side may indicate the position of a loom. Room III communicated with a further room to the east.
Building 34, in the northwest corner of the agora, is defined by roads on all sides. Beyond the road to the south lies the colonnaded building 30. The area to the east was landscaped into three shallow terraces down to the stoa building 28 which defined the north side of the agora. The extent of destruction in this area precludes precise architectural reconstruction, but it is likely that small buildings with open fronts facing the agora may have housed local businesses. Building 34 (10 x 16m) had 6 rooms (V-X), with severe disturbance throughout, arrayed on two levels on a north-south alignment (Fig. 1): the upper, eastern side, comprised rooms V, VII and IX, and the lower western VI, VIII and X) communicated directly. The building was divided into two parts of separate function; the northern comprises rooms V and VI, including a threshold over which were five female terracotta figurines (perhaps indicating a small shrine), while the southern contained the intercommunicating rooms VII, VIII, IX and X: a water channel ran beside room X and across the neighbouring road. Rooms VII and VIII in the centre of the building were entered via room X, and covered with a thick destruction deposit containing sherds of pithoi and other storage vessels and many bronze coins. Rooms IX and X on the south side of the building were workshops or storerooms: four pithoi were found in situ in room IX (a room in which many bronze coins, iron nails and pins, terracotta female figurines, a stone rubber, two iron spearheads, a transport amphora and a bell-shaped plain vessel with two openings. Room X contained iron nails and pins, terracotta female figurines, and four stone grinding bases (Fig. 2).
Sector Z10: two rooms of a complex on the easternmost end of the plateau were investigated. Room 1 contained a stone bench along the east wall, with a destruction deposit containing mainly domestic pottery. Room II lay largely under a stone mound with a little tile and pottery.
Sectors E9-E10 comprises one room (5 x 5m) later than the surrounding structures. The entrance is on the west side.
Roads: a large part of the central arterial road was excavated, plus the main cross road, and smaller roads north of building 33 (between buildings 10 and 32) and between buildings 30 and 34 in the northwest part of the agora. A thick destruction layer was found over all these roads, chiefly from neighbouring buildings, with much pottery, many terracotta and metal objects, and silver and bronze coins. In all cases the road surfaces were made of beaten clay, gravel and small stones, tile and sherds packed over bedrock.
Author
Catherine MORGAN
Bibliographic reference(s)
ADelt 60 (2005) Chr. B1 575-8.
Date of creation
2014-03-31 00:00:00
Last modification
2021-11-19 12:11:39
Picture(s) 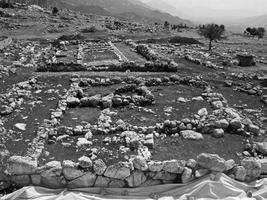 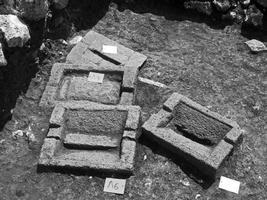