Key-words
Basilica - Agricultural facility - Residence - Tomb - Numismatics - Tools/weapons - Painting - Religious building
Type of Operation
Excavation - Rescue excavation
Institution
Η’ ΕΠΚΑ
Toponym
Filiates
Linked Record
2005
Report
Plain of Elaia and Finiki, Filiates. G. Riginos (Η’ ΕΠΚΑ) reports on excavation at a number of sites in connection with irrigation work on the plain (Fig. 1).
Site 1: a rectangular, stone-paved building with walls of large unworked stones and a threshold block in the northeast corner. A destruction layer contained a quantity of pithos and amphora sherds, plus other vessels. No date is reported.
Site 2: trenching for a water channel revealed a rough pavement (of small stones, tile and sherds packed in soil) for a length of 21m. Fill removed during cleaning contained animal bone, shell, a bronze item and a large quantity of pottery (noting three probably Archaic sherds with linear decoration).
Site 3 (Fig. 2): part of a farmhouse with at least three phases was revealed on the southern part of the plain. The earliest phase is represented by one polygonal wall, the second was likely short, and the third by the re-use of the visible early walls for the foundations of a new structure. East of the building, a dump deposit contained a significant quantity of pottery (mainly late Classical and Hellenistic drinking vessels), an early fourth-century figurine, a relief skyphos depicting a male head (dated ca. 175-146 BC) (Fig. 3), and bronze coins of the Epirote League. Large quantities of domestic pottery and storage vessels (especially transport amphorae), and ovicaprid and bovine bones, indicate that the structure was a farmhouse destroyed in the Roman sack of 167 (noting evidence of burning in the destruction deposit over the entire area).
Sites 4-12: traces of human activity over the entire plain of Elaia did not all merit excavation. Thus site 4 produced part of a human cranium and fragments of rooftile; sites 5 and 6 a kind of pacving of small stones and tile fragments; site 7 a looted Roman cist grave; site 8 part of a tile kiln; site 10 the corner of a modern building; and sites 9 and 12 lime kilns.
Site 11: a small basilica with a semicircular apse shows at least three building phases (Fig. 4). The walls (preserved to a height of ca. 3m) were of small-medium roughly worked stones, with courses of slabs and occasionally bricks. The main entrance was on the west side; originally there were four further entrances, two in the north wall and two in the south (all later closed). Inside there was a low bench around the walls. Sections of wall painting were preserved around the altar, the templon and in the northwest corner of the building. Three layers of painting were preserved on the north wall (the latest depicts a saint on horseback). Tile and cist graves were preserved inside and outside the building, with a later built tomb also found in the centre of the main church.
Site 13: two buildings were investigated (that to the west more fully, since that to the east fell beyond the excavated area). The west building, a Late Roman farmhouse, was divided into northern and southern parts around a central court (Fig. 5). The north part contained four storage and adjunct rooms (rooms II and III were initially a single space). Room IV contained sherds of cooking pots and glass vessels and a bronze ring. Area V was an open courtyard, at the west edge of which was the enchytrismos of an infant. The south part contained the main residential spaces: the majority of coins were found in the west of this area. The residential area was approached via the courtyard, which also accessed the storerooms, with doorways in the south and east sides, although the storerooms also had a separate entrance from the east. The complex is dated by green and violet glass drinking vessels, pottery with combed decoration, bronze lenticular coins and coins of Constantine the Great and his successors, and the custom of burial inside the house.
Site 14: a pipe trench north of the church of Ag. Georgios revealed sherds and tile over a distance of ca. 150m. This was investigated via excavation at three locations where find density appeared greatest.
14α: a well-preserved rectangular house containing five rooms, with walls standing to four courses (Fig. 6). Both internal and external walls were 0.55-0.65m thick, built of two rows of unworked or roughly worked medium-sized stones bound in clay, and with a fill of small stones between the faces: the superstructure was probably brick (as preserved in room I). Yellow and white decorative plaster was preserved in rooms IV and V. Storage and adjunct rooms in the east part of the building included one room with four pithoi in situ, and an iron working shop immediately to the south. The room furthest to the north (plus perhaps that immediately to the west of it) was likely used for dining, to judge from the animal bones found there. Room VI also produced two iron knives, domestic pottery and fragments of glass vessels. The building is dated to the fourth – seventh centuries AD by the glassware and cooking pots, combed ware sherds and lenticular coins, as well as the construction of the walls.
14β: finds indicating domestic activity comprise plain domestic pottery and cooking wares, sherds with combed decoration, fragments of glass vessels, three conical terracotta loomweights, a few lenticular coins and a bronze medicine spoon. No architectural remains were found and it is conjectured that the building was located further to the east.
14γ: the corner of a building and part of a stone-paved road were found. Finds identical in character to those from 14α and 14β suggest that this is part of a larger residential complex of the fourth to seventh century AD.
Author
Catherine MORGAN
Bibliographic reference(s)
ADelt 60 (2005) Chr. B1 570-4.
Date of creation
2014-03-31 00:00:00
Last modification
2021-07-21 16:54:51
Picture(s) 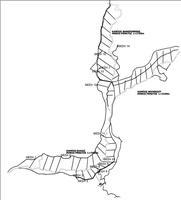 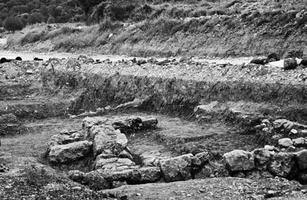 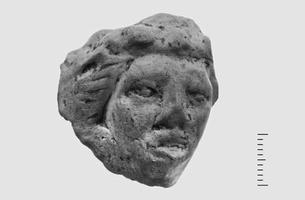 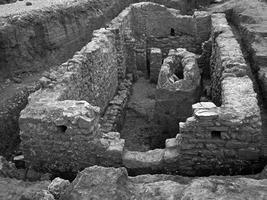 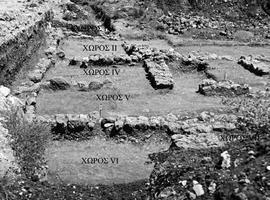 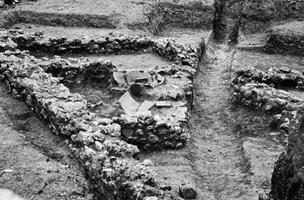