Key-words
Figurine - Inscription - Numismatics - Find Type
Type of Operation
Excavation - Rescue excavation
Institution
Η’ ΕΠΚΑ
Toponym
Kanoni
Linked Record
2005
Report
Kanoni (property of St. Tzeliou). G. Metallinou (Η’ ΕΠΚΑ) reports the discovery of two parts of buildings in the northwest corner of the plot, a closed stone water channel running east-west through the centre of it (plus remains of other open and closed channels), a Hellenistic plaster-lined cistern (entered via two steps) with a stone-paved floor in the northeast of the excavation, sections of wall and an extensive destruction layer. Removal of this destruction layer in the northern (un-built) part of the plot revealed sections of two parallel open stone water channels (Classical in date) running east-west; a half-worked column was built into one.
Finds include part of a rooftile inscribed with the name of the prytanis (..ΠΙ ΕΥΦΑΝΗ), a small closed terracotta vase, a two-sided round terracotta object, part of a marble kioniskos (round in section), and the foot of a terracotta figurine. Other finds include toes of Classical and Hellenistic Corfiot amphorae, ca. 22 conical terracotta loomweights, fragments of terracotta basins (and one stone basin), and Classical and Hellenistic black-glaze sherds (skyphoi, salt-cellars etc.).
Further excavation in the southeast of the plot revealed three further substantial walls (one, Hellenistic, north-south and two, Classical, east-west), with a fourth (Hellenistic) uncovered in the northwest. At the west edge of the excavated area (and extending beyond it) was a Hellenistic destruction layer containing unworked and partially worked stones, tile, part of a column and another architectural member. An open stone water channel ran northwest-southeast along the west side of the plot, continuing beneath the foundation of the north-south wall noted above, where it joins another north-south channel. Both channels date to the Classical period.
Only two coins were founds (very worn bronze coins). The heads of three terracotta figurines, a black-glaze skyphos, a small glazed lamp, and a bronze tool are also noted. Other portable finds include amphora toes, ca. 90 conical and three pyramidal terracotta loomweights, and sherds of pithoi, basins, and black-glaze skyphoi.
Author
Catherine MORGAN
Bibliographic reference(s)
AD 60 (2005) Chr. B1 554-556.
Date of creation
2014-03-31 00:00:00
Last modification
2018-08-22 09:24:43
Picture(s) 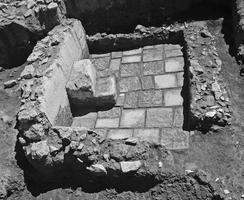 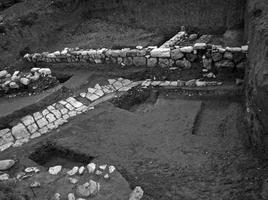