Key-words
Inscription - Sculpture - Sanctuary
Type of Operation
Excavation - Rescue excavation
Institution
Γ’ ΕΠΚΑ
Toponym
Athens East (Olympieion, National Gardens, etc.)
Linked Record
2005
Report
Iosif ton Rogon 9. †P. Bougia (Γ’ ΕΠΚΑ) reports on further excavation of the Pythion (Figs 1-3), which revealed fragments of marble bases (some inscribed) of choregic monuments. One carried the fragmentary inscription: […]ΟΣ ΜΝΕΣΑΡΧΟ ΑΧΑΡΝΕΥΣ / [… Ο]ΙΝΕΙΔΙ ΚΕΚΡΟΠΙΔΙ ΠΑΙΔΟΝ / […]ΙΘΑΙΓΕΝΟΣ ΕΔΙΔΑΣΚΕ ( Λ 7538), and commemorated a victorious boys’ chorus at the Thargelia, probably dating to the fifth century BC. The base preserves two elliptical tenons which held two of the tripod legs. Fragments of a cylindrical base (Λ 7540) were found with the cutting for a tripod leg with a lion’s foot. A marble sculpted stele of the late fifth to fourth century BC depicts a young, standing deity wearing a long chiton (probably Apollo).
A rectangular base (Λ 7537) with the inscription: […] ΝΙΚΟΣΤΡΑΤΟ ΕΧΟΡΗΓΕ / [… ΑΚ]ΑΜΑΝΤΙΣ ΕΝΙΚΑ commemorated a victorious choregos from the Dionysia and dates from the early fourth century BC. Another rectangular base (Λ 7541) with a circular cutting on its upper surface carried an inscription in Archaic letters: ΧΑΡΜΙ/ΔΕΣ: ΚΑ/ΛΟΣ, probably a private monument of the fifth century BC.
The bases Λ 7537 and 7538 were reused in rough masonry defining a nearly four-sided space (1.3 × 1.1 m) in the southwest of the plot. Clearing of the bedrock in this area revealed two miniature protocorinthian aryballoi and parts of an alabastron, as well as seventh-century BC sherds. Late Geometric and Archaic pottery was noted at several points. The fills across the area contained fifth- and fourth-century sherds, bases of third- to second-century spindle-shaped lachrymateria, and a very large number of sherds of unstamped amphoras.
The plot contained several ancient hydraulic structures, from east to west:
a) a 9m-long stretch of terracotta pipe led northeast-southwest in an irregular course, continuing into the adjacent plot. Third- to second-century lachrymateria from the fill postdate its abandonment.
b ) A trench (width 2.3m, max. depth 1.78m, length 3m) was cut into bedrock immediately to the west of the channel.
c ) Four shallow circular pits lay to the west of the pipeline, with diameters between 0.7 and 1.35 m.
d ) Remains of a second pipeline were uncovered east of a Roman cistern. Two terracotta lines with an inverted Π section were covered by tiles and founded on rough stonework.
e) The eastern part of a large Roman cistern was located on the western side of the site (visible dimensions: 14.6 × 6m); its west and south parts were lost beneath the neighbouring pavement. Two construction phases were identified: the first, is represented by an east wall (9) incorporated fragments of limestone blocks, and a floor in opus spicatum. In a second phase, wall (7) divided the cistern in the northern part, while wall (6) immediately to the east widened it slightly. The fills contained mainly fragments of fourth-century AD amphorae and prochoi (some with lines), apparently unrelated to the cistern which must have gone out of use by this time. Later walls (1, 2, 8) and bothroi were then added.
Author
Robert PITT
Bibliographic reference(s)
AD 60 (2005) Chr. B1 83-85
Date of creation
2014-03-27 00:00:00
Last modification
2020-02-10 12:37:06
Picture(s) 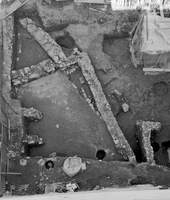 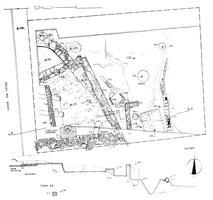