Key-words
Fortifications - Domestic space
Type of Operation
Excavation - Rescue excavation
Institution
Γ’ ΕΠΚΑ
Toponym
Athens East (Olympieion, National Gardens, etc.)
Linked Record
2005
Report
Iosif ton Rogon 8 (P. Argyrokosta plot). T. Kokkoliou (Γ’ ΕΠΚΑ) reports on excavation south of the Olympieion, which uncovered what may be part of the fourth-century BC proteichismos, part of a semicircular building, foundations of Hellenistic houses, and part of a Roman imperial water channel (Figs 1,2).
A small section of fortification wall running northwest-southeast was exposed in the eastern part of the plot (length 2.4m, width 1.1-1.2m). The northwest part was destroyed by a Roman channel (see below). The wall is of isodomic masonry with conglomerate boulders preserved to a height of three courses (1.4 - 1.5m).
Almost in the centre of the plot, a curved wall of small and medium sized stones (Fig. 1), dating ca, 300 BC, was preserved to a height of 1.15m. On its west side, a second joining wall was probably a strut.
Hellenistic (ca. third-century BC) habitation in the western part of the plot is indicated by rooms containing large numbers of loomweights.
A Roman aqueduct-tunnel (length 4.4m, width 2.1, height 2.15 - 2.25m) was built of unworked stones and hydraulic mortar (Fig. 1); sections of it destroyed part of the proteichismos. The pipeline belongs to the Roman Imperial network (second- to third-century AD), sections of which were found in the immediate vicinity on Koryzi 8, but also more generally on both sides of Ilissios, at 4-6 Neri Street, and in the National Gardens.
Author
Robert PITT
Bibliographic reference(s)
AD 60 (2005) Chr. B1 81-83
Date of creation
2014-03-27 00:00:00
Last modification
2020-02-10 12:54:55
Picture(s) 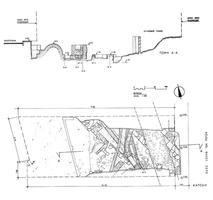