Key-words
Lamp - Numismatics - Dress and personal ornament - Cemetery
Type of Operation
Excavation - Rescue excavation
Institution
Γ’ ΕΠΚΑ
Toponym
Athens East (Olympieion, National Gardens, etc.)
Linked Record
2005
Report
Vourvachi 20 (property of Arsinoi Ltd). T. Kokkoliou (Γ’ ΕΠΚΑ) reports the finding of 28 graves of the fourth to sixth centuries AD (Figs 1,2). The tombs belong to the Late Roman cemetery of the Kynosarges area, part of which had been excavated at the V. Asimomyti plot on Paraskevopoulou 8. The plot lies outside the southwest corner of the Kynosarges Gymnasium uncovered in rescue excavations from the 1970s onwards along Diamantopoulou, Perraivou, and Kokkini Streets.
The graves are all rectangular built tombs with brick vaults, and all had been disturbed. Their walls are of rough stones and brick with binding material, and are coated with mortar. Some tombs have stones projecting from the long sides, perhaps for placing lamps. Skeletal remains found in most of the graves were disturbed and from more than one burial. Two cist tombs with vaulted covers were discovered without goods (T26 and T 27). On their east sides, a small rectangular door led to a narrow passage which gave access to the grave during later funerals, when the earlier burials were moved. Tomb 9 had an engraved cross on its eastern narrow side. Grave goods included pottery, lamps, jewellery and coins; the majority of burials, however, lacked offerings and most pottery was unpainted.
In summary, all graves are oriented east-west (except T11 which is north-south), as is common with Christian graves. Multiple burials within the same tomb, as shown by accumulations of bones to one side of the tombs, are an early practice which continued through the Late Roman and Early Christian periods, often due to the lack of space in large urban centres. As with other nearby cemeteries, the Late Roman burials were arranged in dense clusters, developing further eastwards than in earlier periods.
Author
Robert PITT
Bibliographic reference(s)
AD 60 (2005) Chr. B1 78-79
Date of creation
2014-03-27 00:00:00
Last modification
2020-02-10 12:58:50
Picture(s) 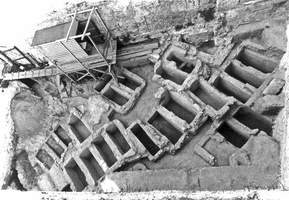 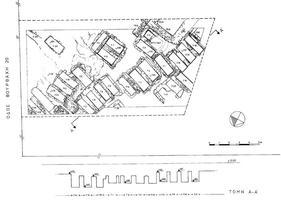 Fig. 2/ Athens, Vourvachi 20. Plan and section of the excavation.