Key-words
Figurine - Lamp - Numismatics - Domestic space - Cemetery - Production/extraction site
Type of Operation
Excavation - Rescue excavation
Institution
Δ’ ΕΠΚΑ
Toponym
Argos
Linked Record
2002
Report
Argos, 14 Makariou Street (O.T. 119, property of E. Katsaouni). Ch. Piteros (Δ’ ΕΠΚΑ) reports the discovery of a Hellenistic potter’s workshop in the south part of this plot – a rectangular stone structure, with three rooms, developed in two phases. The structure was used for the preparation of clay and forming of pots: the kiln probably lay to the west. During the second construction phase the building was extended to the east with the addition of a cistern lined with hydraulic cement: a well also lay to the east. Beneath the west part of the building was an Archaic pithos burial containing an adult inhumation but no goods. Finds from the workshop include mostly Hellenistic pottery, loomweights, lamps, figurines and a small square terracotta altar with a relief scene of a four-horse chariot and Nike bearing a thymiaterion.
In the north part of the plot were a section of a Hellenistic building foundation, a Hellenistic limestone capital, three Hellenistic-Roman tile graves, and a round repository containing plain Hellenistic krateriskoi, interpreted as an offering to the dead. Two Archaic enchytrismoi of children were also found, one in a pithos and with a krateriskos and the other in a Late Geometric/Archaic amphora.
Classical and Hellenistic domestic pottery, lachrymateria and coins were found in the top levels across the plot.
Author
Catherine MORGAN
Bibliographic reference(s)
ADelt 56-59 (2001-2004) B4, 52-53.
Date of creation
2013-10-18 00:00:00
Last modification
2020-04-03 10:55:00
Picture(s) 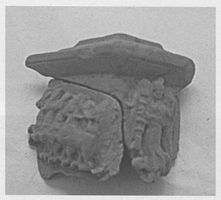