Key-words
Inscription - Dress and personal ornament - Sculpture - Metal - Glass - Cemetery - Production/extraction site - Road system/waterway - Find Type - Material Type - Site Type
Type of Operation
Excavation - Rescue excavation
Institution
Δ’ ΕΠΚΑ
Toponym
Archaia Epidavros, Palaia Epidavros, Epidavros
Linked Record
2001
Report
Ancient Epidauros. Ch. Piteros (Δ’ ΕΠΚΑ) reports that continuing work to lay drainage pipes revealed antiquities in several locations.
Polykleitou Street: at the west end of the street, a Byzantine basement storeroom was found, as well as a Hellenistic-Roman deposit of ground-up murex shell. Slightly further along the street were three Hellenistic walls.
Maniadaki Street: to the north of Polykleitou Street, a strongly-built wall of a Late Roman/Early Byzantine building.
Poseidonos Street: in the square by the main harbour entrance at the north edge of the coastal Akti Poseidonos, a stone retaining wall preserved to a height of three courses, with another similar and probably older foundation on its west side. Further stretches of both walls was found on Daidalou Street, 35m west of Akti Poseidonos. These may be part of a major flood defence around the entire west side of the harbour, which probably dates to the fourth or third century BC.
Akti Poseidonos: northwest of the football stadium, at the level of the Verdelis Inn, a stone basin (probably from a public building, perhaps a gymnasium) and a doric column capital were found built into an Early Byzantine wall. Crushed murex shell was also found. Further north, beyond Parodos Ippolytou, was an Early Byzantine cistern, with pithos sherds, crushed murex shell, and domestic pottery (perhaps a dye works).
Ippolytou Street (west of Akti Poseidonos): at the start of the road, Early Byzantine walls and a drainage channel were found, plus ash and crushed murex shell. A building of the same period lay further west, along with a Late Hellenistic stele inscribed ΕΥΚΑΡΠΙΑ ΧΑΙΡΕ re-used as a drain cover. 19.5-21.6m along the street, on the south side, lay a Roman cist grave which contained a female inhumation with a bronze patera, a four-sided glass closed vessel, lachrymateria (one terracotta and two glass), two bronze shell-shaped cosmetic palettes, a gold ring with an engraved stone in the bezel (depicting a male head), a bronze mirror disc, two gold earrings, and 17 gold leaves probably from a dress ornament (the findspot of these leaves had a purple colour, perhaps from a degraded textile).
Plakes (public road to Gialasi): a large Late Roman retaining wall (with a spur to the north) was found 66m south of the intersection with Asklepiou Street. This contained many spolia from earlier buildings, large orthostats, marble grave stelai (including a Roman stele, inscribed ΑΛΕΧΑ/ΧΑΙΡΕ, depicting a naiskos with inside it a male figure wearing a himation), and the marble surround of a funerary monument. This wall too was likely part of the defences which protected the southwest part of the city and the harbour when the river to the west of it flooded, noting that it was founded on riverine gravels, and that it was later demolished by floodwaters. Further north along the road was a column from a Roman aqueduct, with a section of the aqueduct itself slightly further north.
Public road to Gliati: just south of the junction with Theatre Street on the north side of the road was a stretch of ancient road, part of a plastered wall, limestone blocks, roof tiles, and a disturbed Roman tomb (from which glass lachrymateria were collected). A section of a Roman water channel parallel to the road was of the same construction as that at Plakes of which it is a continuation. A stone base for a funerary stele was also found.
Theatre Street: west of the junction with the road to Gliati, towards Asklepiou Street, were building foundations with evidence of flood deposits from the nearby river.
Author
Catherine MORGAN
Bibliographic reference(s)
ADelt 56-59 (2001-2004) B4, 50-52.
Date of creation
2013-10-18 00:00:00
Last modification
2018-08-22 09:24:42
Picture(s) 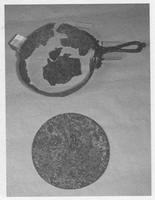 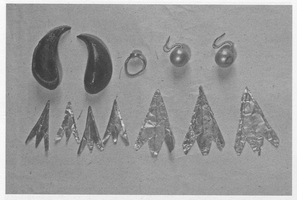