Key-words
Figurine - Tools/weapons - Dress and personal ornament - Metal - Cemetery - Find Type - Material Type - Site Type
Type of Operation
Excavation - Rescue excavation
Institution
Δ’ ΕΠΚΑ
Toponym
Archaia Epidavros, Palaia Epidavros, Epidavros
Linked Record
20002000 (1)2000 (2)2001
Report
Ancient Epidauros, Nera. Ch. Piteros (Δ’ ΕΠΚΑ) reports further investigation of a known Mycenaean cemetery.
A chamber tomb was excavated on the property of I.S. Verdeli. The dromos contained Mycenaean and later pottery, and a small cist grave (suitable for a child). The chamber (2.1x2.4m), the superstructure of which had collapsed, contained two Late Helladic IIIC-Submycenaean burials. An inhumation of an adult woman was accompanied by an amphoriskos, a prochoiskos, a cup, a bronze pin and a terracotta spindle whorl, plus a stone cosmetic palette (for white lead). To the south lay the inhumation of an adult male with a small cup. Bones from previous burials were gathered on the south side of the chamber, together with a Phi figurine.
Six chamber tombs were excavated on the property of P.V. Karagianni.
Tomb 1 (dromos 4.4m long, 0.9-1.1m wide; oval chamber 2.6x2.9m): the dromos contained Late Helladic I-IIB pottery, a lead clamp, and an empty cist grave (suitable for a child). The chamber, which had collapsed by the Late Byzantine period, had a small opening to the southeast created by the construction of tomb 3. No burial was found in situ, but bones from three inhumations were gathered at the northeast, west and south sides of the chamber. Grave goods at the northeast comprised an alabastron, a Late Helladic IIIB prochous, three pieces of blue glass paste probably from two pins, and a small steatite conical button.
Tomb 2 (LHIIIB: dromos 6.9m long, 0.8-1.1m wide; oval chamber 2.5x3.65m). The collapsed chamber contained in the centre a disturbed adult inhumation with a bronze spearhead and knife, and (by the head) 23 tusks. To the north were the displaced bones of a further burial with five tusks (indicating that all the tusks were originally deposited with this burial). The remains of two further displaced burials were collected on the south and west sides of the chamber. Sherds of a stirrup jar were also found.
Tomb 3 (probably LHIIIB: dromos 2.2m square; chamber 1.9x1.7m): the chamber, which was cut into that of tomb 1, contained two adult inhumations, one in situ in the centre and the displaced bones of a second gathered at the north side, with no grave goods. A conical steatite button was found in the chamber.
Tomb 4 (LHIIIB: dromos 3.3m long, 0.9m wide; chamber 1.3x1.5m): a pit in the north side of the dromos contained reburied bones from an adult inhumation, with sherds of a small alabastron and a plain prochous. The chamber contained an adult inhumation with no goods: a conical steatite button was recovered.
Tomb 5 (LHIIIC-Submycenaean: the dromos is preserved for a length of 7.5m but continues beneath a modern road; rectangular chamber 2.3x3m). The dromos contained an empty cist grave; three pieces of bronze spirals were also found. The chamber, which had collapsed by Early Byzantine times (it contained a Byzantine millstone), held six adult inhumations. The remains of burial 1 (with an alabastron) were gathered in the northeast corner. Burial 2, on the south side, had an LHIIIC Late lekythos and skyphos. Burial 3, of a woman, had an LHIIIC Late-Submycenaean skyphos, a small handmade burnished prochous and a bronze pin. Burials 4-6 followed in sequence south from burial 3. Burial 4 had a conical button, and 5 and 6 no goods.
Tomb 6 (LHIIIB: dromos 8.8m long, 1.15-1.32m wide; rectangular chamber 3.2x2.65m). Mycenaean, mostly LHIIIB, pottery was collected from the dromos, which was also re-used for a Submycenaean burial (a built cist grave containing an adult inhumation with an amphoriskos). The LHIIIB2 stirrup jars were found over the debris of the collapsed chamber superstructure. To the left of the entrance on the southeast side were a mug (FS 226), a stirrup jar, and a plain conical kylix (FS 274) with a dipper inside. A large quantity of tiny blue glass paste beads was also found. In the centre of the chamber lay inhumation 1 accompanied by an alabastron, four LHIIIB2 stirrup jars, and a bronze knife. Burial 2, immediately to the west and in clear association with burial 1, had an LHIIIB stirrup jar and basin. Many plaquettes of blue glass paste were found in the area between the two burials, with a variety of decoration including rosettes and in one case figure-of-eight shields. A conical button and three lenticular seals were also found (one depicting an animal, perhaps a goat, one in blue glass paste depicting a lion, and the third also in a blue material with a lion and a wild goat (?)). On the north side of the chamber was an inhumation (3) plus the cranium and other bones of a previous burial, with a conical steatite button and a round pottery lid. Burial 4, a disturbed inhumation, had four stirrup jars, a basin, a Psi figurine, part of a glass paste plaquette with a rosette, and three gold sheets with spiral decoration plus five more small pieces which were probably dress ornaments.
Author
Catherine MORGAN
Bibliographic reference(s)
ADelt 56-59 (2001-2004) B4, 47-50.
Date of creation
2013-10-18 00:00:00
Last modification
2018-08-22 09:24:42
Picture(s) 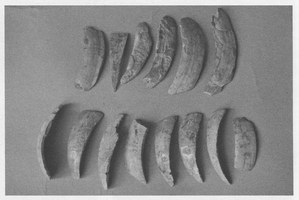