Key-words
Figurine - Lamp - Tools/weapons - Dress and personal ornament - Wood - Metal - Domestic space - Cemetery
Type of Operation
Excavation - Rescue excavation
Institution
Δ’ ΕΠΚΑ
Toponym
Argos
Linked Record
2003
Report
Argos, Herakleous Street (property of A. Koutroubi). E. Sarri (Δ’ ΕΠΚΑ) reports the discovery of late Middle Helladic, Mycenaean, Early Geometric and Hellenistic remains in the eastern part of the property. In the upper excavation levels, the walls of a Hellenistic building had been damaged by a later well. Two Late Hellenistic secondary cremation burials were found. The first (grave II) was a child burial in a transport amphora, with a lamp, a type B krater and 21 whole lachrymateria plus many sherds (including handmade examples). The second (grave III) had a little bone with 43 lachrymateria (none burnt) contained in a rectangular clay structure (which partially destroyed a Mycenaean wall), in and around which were traces of fire. Two further lachrymateria were found outside the structure. A third cremation, of a youth (grave V) was contained in a rectangular pit, with 11 lachrymateria, a lamp, a krateriskos, two dove figurines, a chytra and a spatula, many of which bore signs of burning: carbonised wood in the pit indicates a primary cremation.
In the northeast of the excavation, an Early Geometric cist tomb (I), cut into a Mycenaean settlement level, contained the extended inhumation of a woman with two gold spirals, two bronze rings and two bronze pins, plus an amphora, a trefoil-mouthed oinochoe, three skyphoi, a cup, a handle-less cup and a kylix. Bones from earlier burials with two handle-less skyphoi were gathered on the east side of the grave: a further trefoil-mouthed oinochoe was set over the cover slabs.
A four-roomed Mycenaean building contained a terracotta hearth with a stone surround. Below the west part of this building were late Middle/early Late Helladic walls, two of which are associated with a building which continued beyond the west edge of the excavation, and which preserved part of a floor. In contact with the east face of one of these walls was cist grave IV, of stone slabs, which contained the inhumation of a youth. Excavation was halted at a depth of 3.55-4.05m, when a riverine pebble deposit was encountered.
Author
Catherine MORGAN
Bibliographic reference(s)
ADelt 56-59 (2001-2004) B4, 32-33.
Date of creation
2013-10-17 00:00:00
Last modification
2020-03-31 12:24:41
Picture(s) 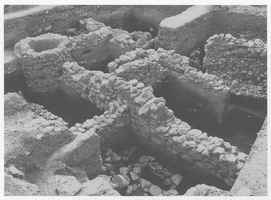 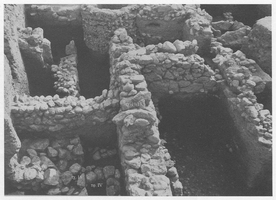