Key-words
Figurine - Tools/weapons - Cemetery
Type of Operation
Excavation - Rescue excavation
Institution
Δ’ ΕΠΚΑ
Toponym
Argos
Linked Record
2002
Report
Argos, 162 Herakleous Street (property of D. Tsaprali). E. Sarri (Δ’ ΕΠΚΑ) reports the discovery of further tombs in a wider cemetery in the northwest part of the modern city. Part of a tripartite Roman funerary building in the west of the excavation area contained two brick-built tombs (I and IX) built into the west face of the east wall, the remains of two similar largely destroyed tombs, and an enchytrismos in a transport amphora (XVII). Tomb 1 contained a disturbed burial, while tomb IX held the reburial of five individuals. A north-south cobbled street, constructed in the Hellenistic period, flanked the building on the east side: its continuation has been traced on neighbouring plots. Beneath the funerary structure lay a Hellenistic building.
In the centre of the excavation area were three limestone cists, with sides made from single blocks (III, X and XXIV). Tomb III had been opened in antiquity for the removal of the primary burial to a terracotta larnax which was then placed on top of the north wall of the grave. The Corinthian lekanis of the third quarter of the fifth century that accompanied that burial was wedged in place by a cover slab. Inside the tomb were three extended inhumations and comingled bones from burials. The earliest of the three burials was oriented east-west and accompanied by Corinthian vases of the last quarter of the fifth century, and the next two (oriented west-east) had two second-century local vases. Tomb X, covered by two limestone slabs, was used during the second half of the second century and the early first: the remains of two burials were gathered on the west side while two later, successive inhumations occupied the central space. Grave goods comprise plentiful local pottery and an iron knife. Tomb XXIV contained two inhumations, with the bones of an earlier burial pushed to either side. Argive, Corinthian and Attic pottery, bronze strigils and a terracotta female figurine date the burials to the second half of the fifth century.
Mycenaean levels were located chiefly in the south-western part of the excavation. Middle Helladic graves were found across the entire excavation area, and were particularly densely packed in the east. The latest were the clay-walled tombs IV and VIII (the former being the later). Both these and the simple cists V, VI and VII were covered in riverine deposits. The built cists XI, XII, XXII and XXIII in the east, the pit XX in the centre, and the built cists XIII, XIV, XV, XVIII and XXI and pit XVI in the west of the plot were all cut into the hard gravel layer which covered the entire excavated area. Tomb XIII and part of tomb XV were covered by the cobbled street. Tomb XXV was found at the greatest depth, along the south edge of the plot. All graves held single inhumations with the exception of XV and XXII where the first burial was displaced for a second. Only seven tombs (IV, VI, XIII, XVIII, XVI, XXIII and XXV) held goods: pots were placed by the head of the deceased. The child burial in tomb XVI contained a kylix, and tomb XXV seven miniature vessels and a bone pin.
Author
Catherine MORGAN
Bibliographic reference(s)
ADelt 56-59 (2001-2004) B4, 26-28.
Date of creation
2013-10-17 00:00:00
Last modification
2020-03-31 10:41:51
Picture(s) 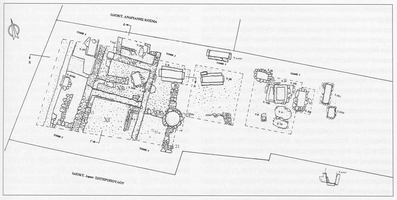