Key-words
Figurine - Hearth/Kiln/Oven - Numismatics - Cemetery
Type of Operation
Excavation - Rescue excavation
Institution
Δ’ ΕΠΚΑ
Toponym
Argos
Linked Record
2002
Report
Argos, Parodos Phoroneos (property of I. Vadevouli). A. Banaka-Dimaki (Δ’ ΕΠΚΑ) reports the discovery of two small Hellenistic tombs (partially destroyed by a previous modern house on the site) and a Late Hellenistic-Roman kiln near the Hadrianic aqueduct on the eastern slopes of the Larisa. Both structures entailed substantial cutting-back of the bedrock.
Tomb 1, a small rectangular structure (1.3 x 0.5m) lined with brick and unworked stones, contained the partial remains of a single supine inhumation with a handle-less vessel of the first century BC. Fragments of bone pins or needles were also collected. Tomb 2 to the north (0.8 x 0.6m) was of similar construction: part of an animal figurine was recovered but no bones. The lower part of the round kiln chamber and stoking tunnel were preserved: the chamber walls were of brick and stone slabs with a thick clay packing between them and the bedrock into which the chamber was sunk. Among the few portable finds, 48 coins (mostly bronze) found in fissures in the rock, attest to commercial activity on this site.
Author
Catherine MORGAN
Bibliographic reference(s)
ADelt 56-59 (2001-2004) B4, 15-16.
Date of creation
2013-10-17 00:00:00
Last modification
2020-03-31 12:55:25
Picture(s) 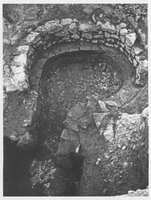 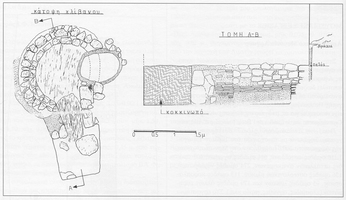