Key-words
Hearth/Kiln/Oven - Cemetery - Find Type - Site Type
Type of Operation
Excavation - Rescue excavation
Institution
Δ’ ΕΠΚΑ
Toponym
Korinthos, Corinth
Linked Record
2003
Report
Ancient Corinth, Loutsa (property of Th. Tsouloucha). P. Kasimi (Δ’ ΕΠΚΑ) reports the discovery of 39 tombs from a cemetery outside the city wall, including eight limestone sarcophagi, a tile grave, two cists, 15 simple pits, 11 pits with stone covers and one pit with tile covers, dating from the sixth century BC until the Early Hellenistic period (300-230 BC). They were scattered with no consistent orientation or groupings, and all contained single inhumations. They had almost all been looted, but evidently in haste as some grave offerings (lamps and mostly miniature vessels) remained.
A potter’s kiln lay close to the surface in the north-northwest part of the plot. Only the lower part of the rectangular firing chamber (5.4x3.62m) was preserved, hollowed in the bedrock and with walls of tile coated with plaster and clay. The praefurnium, eschara and vault do not survive, and the north part of the kiln was badly damaged by a modern building. A large quantity of kiln props was found but no pottery: a first- to second-century date is proposed on the basis of the props, but secure dating evidence is lacking. Clay was prepared in a pit in the bedrock (similar to a grave and perhaps initially opened as such).
Author
Catherine MORGAN
Bibliographic reference(s)
ADelt 56-59 (2001-2004) B4, 73-75.
Date of creation
2013-10-17 00:00:00
Last modification
2018-08-22 09:24:42
Picture(s) 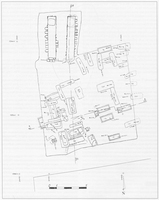 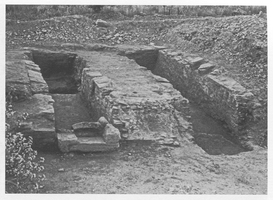