Key-words
Domestic space - Site Type
Type of Operation
Excavation - Rescue excavation
Institution
Δ’ ΕΠΚΑ
Toponym
Korinthos, Corinth
Linked Record
2002
Report
Ancient Corinth, Arapomachalas (property of K. Kakourou). P. Kasimi (Δ’ ΕΠΚΑ) reports the discovery of remains from four settlement phases.
Limestone foundations of the earliest, Classical phase (with pottery of the second half of the fifth century) represent the first activity on the plot. Up to five rooms or areas are identified (plus a terracotta water channel), but no coherent plan. One room (XI) contained an extensive burnt layer.
During the second half of the third century AD, an extensive building complex was erected, with a bath, a floor mosaic and a built hearth. Two intercommunicating rooms (I and II) may date earlier in the third or to the end of the second century, but were then modified for the new building.
The greatest density of architectural remains recovered date to the Late Roman period, including the largest wall of any phase which is dated stylistically to the fifth-sixth century. The overall use of the site remains unclear (though a bath is tentatively indicated) and it is clear that the remains belong to a larger complex extending beyond the plot.
An 11th- and 12th-century phase is indicated by the quantity of pottery recovered from upper levels.
Author
Catherine MORGAN
Bibliographic reference(s)
ADelt 56-59 (2001-2004) B4, 70-72.
Date of creation
2013-10-17 00:00:00
Last modification
2018-08-22 09:24:42
Picture(s) 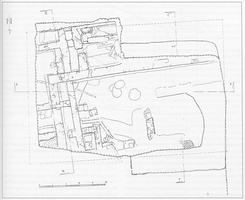