Key-words
Public building - Numismatics - Architectural revetments - Metal - Stone - Public area - Building Type - Find Type - Material Type - Site Type
Type of Operation
Excavation - Research excavation
Institution
Österreichisches Archäologisches Institut
Toponym
Aigeira
Linked Record
200620072008
Report
Aigeira. G. Ladstätter (Director, Austrian Institute) reports on continued excavation of the public guesthouse on the Solon terrace, N of the acropolis. This was originally built in the LCl period and substantially extended in the L3rd Ct BC. After it ceased to function as a public guesthouse it was modified for an as yet undefined purpose and remained in use until the end of the Hel period.
Work continued in the functionally interconnected ensemble of rooms in the SE of the extended guesthouse, excavation of which began in 2005. In 2007, the feeder room and the andron were fully excavated (Fig. 1). In both rooms, the stone-built bottom course of the walls, covered in white plaster, and the floors, executed in terrazzo on a pebble bedding, are almost completely preserved. The square feeder room (6.4 x 6.4m) contains no specific features: its 4 doorways, originally equipped with stone thresholds, indicate its central function, giving access to the rest of the complex. In the andron (6.4 x 4.6m), the central floor area and the surrounding pedestal for the placement of 9 klinai survive in their entirety. In the SE corner of this room, where stone-robbing had extended even to foundation level, a small Hel sandstone capital from a rectangular pillar was found. It probably belonged to a window of the andron. The well-preserved floors contain several drainage features: the NE and SE corners of the andron contain 2 channels which run under the klinai pedestal, permitting water spilt inside the room to drain outside to the E of the building. A further channel runs in the S part of the W wall of the andron, collecting water from the SW corner of the andron and the SE corner of the feeder room and draining it to the S. Confirming previous impressions, the stratigraphic sequence indicates that these 2 rooms, and probably most of the extended guesthouse, were intentionally abandoned in the LHel period. Immediately above the floors was a fill of fine clay, notable for the scarcity of finds, which was the result of gradual wash deposit. Above it was a massive fill of clayey earth from the mud-brick superstructure, containing very small fragments of roof tiles and other ceramics, all heavily disturbed by recent viticulture.
In a sequence of rooms to the W of the ensemble described above, excavation continued in some areas and new soundings were opened. Immediately W of the feeder room are 2 small, nearly square rooms, A and B, entered from the W via a N−S oriented room, C. Beyond it to the W is a large area, D, probably an open yard. Although they partially reuse some walls from the extended Hel phase of the guesthouse, these rooms must have been built after the abandonment of the feeder room and probably much of the SE ensemble of the extended guesthouse. This is indicated by the facts that the dividing wall between rooms A and B abuts the secondarily walled-up W door of the feeder room and that the floor level of these rooms, of which some levelling fills survive, is distinctly higher than that of the feeder room and andron. These levelling fills contained diverse secondary Hel deposits but also numerous Hel bronze coins, which date them to LHel and suggest a chronological separation from the extension of the guesthouse. A clear idea of the use of these rooms has not yet been reached, but the abandonment of the andron suggests that the erection of this group coincided with the cessation of the structure’s function as a guesthouse. The latest, similarly unclear phase of use is indicated by a wall corner discovered in area C: its foundations cut into secondary deposits over the aforementioned levelling fills.
The lower soundings in the area of this group of rooms revealed, immediately beneath the Hel levelling fills, a 0.5m thick, extremely hard layer of clayey earth and densely packed small pebbles. Apart from some lumps of mud packing, this fill contained exclusively PH sherds. A preliminary classification identified a few LMyc sherds, but mostly fragments of MNeo open vessels. This homogenous fill is so far identified over an area of 9 x 4m, but is expected to extend beyond the area so far excavated. It can be surmised that this material represents a secondary deposit of MNeo material originally from the Solon terrace. Older excavation data for the Hel use of the area indicated that water for bathing and banqueting was provided by a local well, indicating local access to water on this natural terrace, an impossibility on geological grounds for the remainder of the settled area at Aigeira. Access to local water and to small arable areas closely fits MNeo settlement patterns − so far the oldest known anthropogenic activity in the Aigeira area.
W. Gauss (Austrian Institute) continued to study finds from the excavations by W. Alzinger in the SE area below the acropolis (1972−1981). Examination of PH finds from excavations on the acropolis was continued by S. Jalkotzy and E. Alram (Vienna) in preparation for publication. A new study of the historical finds from the acropolis was begun by G. Schwarz, M. Poulkou and S. Karl (Graz).
Author
Catherine MORGAN
Bibliographic reference(s)
Unpublished field report, OAI.
Date of creation
2009-12-01 00:00:00
Last modification
2018-08-22 09:24:29
Picture(s) 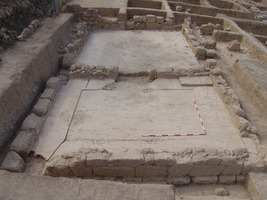