Toponym
Archaia Pisa, Miraka
Linked Record
19952006
Report
Miraka (Velmacheika). O. Vikatou (Ζ' ΕΠΚΑ) reports the discovery of part of a Rom settlement and cemetery. Between them, a wall (preserved for 4m) and a round hearth probably belong to a PH settlement badly damaged by cultivation. A few EH sherds and stone tools were found.
Remains of a Rom settlement lie close by, to the SE. Foundations of 2 buildings were examined, with remains of others visible on the surface over a wide area. Building 1 (maximum dimensions 19.2m l. x 7.3m w.) has only its foundations preserved, with indications of 3 rooms or areas. Building 2 is larger (50 x 20m) and better preserved: it had 8 rooms and was used for storage (the base of a large pithos was found in situ). Finds included spools, Rom sherds mainly from amphorae, as well as some LRom pottery of the 6th−7th Ct AD, faunal remains, glass vessels, olive pits and 7 poorly preserved coins of which only one 4th Ct BC coin of Sikyon could be read. To the W, a channel linked the buildings to a neighbouring stream.
Three 6th−7th Ct AD tombs were located in the same area as the buildings. Tomb 1 is a cist, probably of stone in secondary use, oriented E−W, containing a female burial in extended, prone position. Beside the skull was an undecorated trefoil-mouthed oinochoe and, lower down, 2 silver earrings decorated with grape clusters. The oinochoe, decorated with bands of incised wavy lines, dates to the 6th Ct AD and the earrings to the 6th−7th Ct. Tombs 2 and 3 were slab cists, oriented E−W, and contained single burials but no goods. These tombs relate to the reuse of the buildings and do not form part of an organized cemetery.
The Rom cemetery lies on a low mound ca. 100m W of the settlement. The following tombs were investigated. Tomb 1: lined with terracotta slabs; contained a 1st Ct AD skyphos. Tomb 2: tile grave, with one burial, containing a glass amphoriskos. Tomb 3: tile grave with one bronze coin of Claudius (41−54 AD) placed by the lower jaw of the deceased. Tomb 4: disturbed tile grave, with a poorly preserved skeleton, a terracotta lamp, a tear-bottle and an amphoriskos. Tomb 5: tile grave containing a glass tear-bottle and a broken pottery vessel. Tomb 6: poorly preserved skeleton with sherds of one vessel. Tomb 7: pit grave, 2.2m x 0.8m, containing one female burial in extended, prone position but with iron nails indicating a wooden bier.
Goods were placed in the S part of the tomb and around the lower body up to knee level. Offerings comprised: 18 glass vessels (including flasks, tear-bottles and a phiale, mostly 1st Ct AD); a large bronze phiale at the deceased’s feet; a large bronze amphora at her right. Between these last 2 was a wooden chest of which only the bronze fittings (lock, bindings and carrying strap) survive. This contained a silver spoon, a silver bracelet with a crystal ornament and snake-head finials, a silver coin and small tear-bottles. Pottery comprised a relief skyphos decorated with ivy and vines, a lagynos and a plate with a relief double spiral on the lip exterior and the interior stamp ZOILI. Tombs 8 and 9, next to 7, were tile graves with no goods.
This tomb group dates to the 2nd half of the 1st Ct AD. This is the first time that offerings of the quality of those in tomb 7 have been found in the area of Olympia. The cemetery lies ca. 2km from the Altis and less than 1km from the cemetery at Frangkonisi which produced the important collection of glass vessels now on display in the Olympia Museum.
Author
Catherine MORGAN
Bibliographic reference(s)
http://www.yppo.gr/0/anaskafes/pdfs/Z_EPKA.pdf; O. Vikatou, Πρακτικα του Ζ' Διεθνους Συνεδριου Πελοποννησιακων Σπουδων 1 (Athens 2006) 387-96.
Date of creation
2009-12-01 00:00:00
Last modification
2022-04-05 13:26:02
Picture(s) 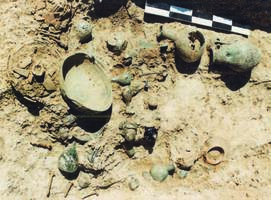