Key-words
Figurine - Lamp - Numismatics - Tools/weapons - Metal - Commercial area - Public area - Find Type - Material Type - Site Type
Type of Operation
Excavation - Rescue excavation
Institution
Η’ ΕΠΚΑ
Toponym
Corfou, Corcyra, Corfu, Korfu, Kerkyra
Linked Record
2002
Report
Figareto, Kanoni (Vlachou and Vlachou-Tsichla properties). G.K. Avgerinou (Η’ ΕΠΚΑ) reports the discovery of two buildings (A and B) separated by the city’s main water channel, on the east side of the Hyllaic harbour, at Vryssoula (on the right of the Corfu-Kanoni road). Occupation is attested from the end of the Archaic to the Hellenistic period, by which time the two buildings formed part of an insula in the Hippodamian city plan. Their well-finished monumental masonry suggests that at least during the Archaic period these buildings may have served a public function.
Building A was initially located on the Vlachou plot, but extends also onto the Vlachou-Tsichla plot. Initially built in the Late Archaic period, it was demolished in the Hellenistic period and rebuilt in successive phases, reusing the isodomic krepis and substantial stone foundation of the first structure. The Hellenistic building had a central court with a well in the north part, and rooms opening off the north, east and west sides (the floors of which were generally not preserved, apart from one terracotta tiled floor). Water channels and a further well were found, noting also a section of the central, covered water channel of the city leading in from the east into the sea at the harbour to the west. In the southwest corner of the Vlachou-Tsichla plot was a stone-built well, which was excavated as far as space and the water table permitted (to -3.46m), leaving it unclear whether it was a functional well or an offering deposit (it contained plain pottery with a little black-glaze and a very few Archaic sherds): a semi-circular construction to the east is apparently related. Also on this plot, remains of a water channel were found to the north of building A, with indications of a further building beyond it. A further, modern well was found in the centre of the eastern edge of this plot.
To the south on the Vlachou plot, very little of building B was preserved (though it too was rebuilt on an Archaic foundation): it is in fact the same structure as building A previously excavated on the neighbouring Mazaraki plot, which was characterised as a residence with a public commercial function, perhaps for the agoranomos (see ADelt 51 [1996] Chr, 409-12, fig.4, pl.110).
On the Vlachou plot large quantities of pottery were found, from Protocorinthian to Late Corinthian, Classical and Hellenistic. Archaic shapes include skyphoi, pyxides, kotyles, hydriae, oinochoae, a jar, aryballoi, pithoi and kraters. Archaic, Classical and Hellenistic figurines were also found, plus a quantity of loomweights, lamps, bowls, Corfiot transport amphorae, bone tools and other domestic items, a glass trefoil-mouthed oinochoe of ca 480-70BC, and five bronze coins mostly of Corfu. A Neolithic stone axe was an unexpected find in this area.
On the Vlachou-Tsichla plot, the presence of Megarian bowls in the Hellenistic level provides a terminal date. Other finds from the plot include Archaic-Classical terracotta figurines (notably an Archaic kourotrophos), lamps, Corfiot transport amphorae (and stamped amphora handles), portable altars, kantharoi, cooking vessels (frying pans and chytres), skyphoi, plates and fishplates, a few lachrymateria and relief bowls, basins, lead sheet, and iron and bronze items (nails, hooks and tools). Three bronze coins include a Corfiot issue of 300-229BC. Fill from the plot also produced Neolithic and Bronze Age flint tools. An Archaic–Classical (mostly seventh/sixth- and fifth-century) deposit in the southwest corner of the plot contained a mid fifth-century terracotta plaque depicting Bellerophon and the Chimaera, two sixth-century plaque fragments probably depicting Dionysos, 70 kalathoi, many kotyles and kotyliskoi, black-figure kylikes, a Protocorinthian kotyle and Corinthian vessels (pyxides and kotyles), terracotta figurines and eight loomweights, a little tile, faunal remains and shell.
Author
Catherine MORGAN
Bibliographic reference(s)
ADelt 56-59 (2001-2004) B5, 244-48.
Date of creation
2013-06-16 00:00:00
Last modification
2018-08-22 09:24:40
Picture(s) 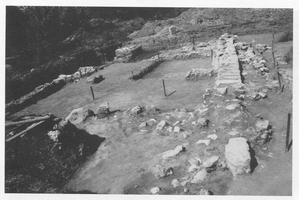