Key-words
Figurine - Lamp - Numismatics - Tools/weapons - Metal - Find Type - Material Type
Type of Operation
Excavation - Rescue excavation
Institution
Η’ ΕΠΚΑ
Toponym
Corfou, Corcyra, Corfu, Korfu, Kerkyra
Linked Record
2001
Report
Figareto, Kanoni. S. Koboliti property. M. Nakou (Η’ ΕΠΚΑ) reports the completion of an excavation begun in 1999. Three construction phases were identified as follows (Fig. 1).
Two Archaic probable peribolos walls (5 and the western part of 2) defined an open area (which produced Archaic pottery). In the Late Archaic period the open area was enlarged to the east (wall 3 replaced wall 5). Finally, in the Late Classical period, three new areas were laid out: these formed part of a probable food shop in operation through the Hellenistic period (noting, however, the shortage of bone or evidence of burning). Room A, with a clay floor, was probably a pantry (it contained much cookware). The largely open-air area B, within the peribolos, had an earthen surface: only a part near wall 3 (with a water channel) was probably roofed. A square clay structure was probably used together with the portable clay hearth next to it for the preparation and sale of food. Two lead weights, part of an iron chain and a collection of coins to the northwest of the structure are also reported. Room A and area B likely intercommunicated. Room Γ (defined by wall 2) was only partially excavated: beneath a destruction layer with much tile, it had a clay floor and a similar range of pottery to room A. The complex was destroyed probably after an assault (noting a stone missile) dated between 229 and 48BC by coins from the destruction level and over the floor of room Γ. The almost complete absence of Roman pottery may indicate an early date within this range.
Finds include 65 bronze coins (mostly Hellenistic coins of Kerkyra), a bronze arrowhead, figurines (including two Late Archaic standing Artemis figurines), decorated archaic pottery and lamps (including one decorated Archaic example). Pottery largely comprised plain and black glaze Archaic and Hellenistic domestic ware, mostly cooking pots, kotyles, skyphoi and transport amphorae.
Author
Catherine MORGAN
Bibliographic reference(s)
ADelt 56-59 (2001-2004) B5, 216-219.
Date of creation
2013-06-15 00:00:00
Last modification
2018-08-22 09:24:40
Picture(s) 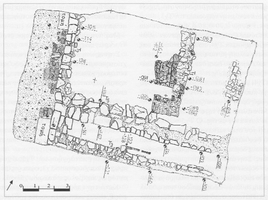