Toponym
Gerakion
Linked Record
199519971998199920002002200420062006 (1)2007
Report
Geraki (anc. Geronthrai). J. Crouwel and M. Prent (Netherlands Institute/Amsterdam) report on the 2007 season, which was dedicated to the final study of material from earlier excavation and survey, with particular focus on the PH and Hel pottery and other finds.
Following study of EH II L destruction deposits in 2006, work concentrated on the earlier occupation of the acropolis. Prolific but fragmentary pottery of earlier periods comes from different parts of the site, but rarely from good contexts. The presence of FNeo and EH I was confirmed, although EH II E pottery was rare (especially in comparison with EH II L). Attention focused on material associated with wall 30 (in trench 17/13K and the NE of field 17), which belongs to the EH fortification system (Fig. 1). This was constructed and filled in EH II (probably EH II L). Material of this date, as well as FNeo/EH I and EH I/II, deriving from occupation levels elsewhere on the acropolis, was used in the construction.
The defensive system on this part of the acropolis was extended in EH II L (wall 180 was built in front of wall 30, with a casemate room between them, in trench 17/13q), and the entire settlement and its defences were destroyed in the same phase − a sequence of events which strongly recalls that at Lerna in phase IIIC. Early pottery from another wall trench to the NE (17/13r), associated with a fragment of a wall of small stones resting directly on the original hill surface, which predates the fortification, was shown to date to EH I/II E. An EH II L pottery deposit from the SW part of the acropolis (trial trench 19/2a), perhaps deriving from another casemate room, was strewn together with finds from survey in this area, resulting in further joins. Study of PH pottery from trial trench 25/4b, below the SE crest of the acropolis and outside the acropolis wall, together with survey finds from the area, produced much EH II pottery, including Geraki ware, and material of historical periods. Finds likely derive from higher up on the acropolis.
Ca. 40 EH clay sealings from the casemate room and other contexts were consolidated and studied (by J. Weingarten) for separate publication. Study of MH pottery from the site began: this largely comes from fills and dumps of household ware. I. Whitbread continued work on the MH fabric typology. Study of the historic periods focused on 2 LHel buildings (room 1 of building C and room 5 of building B) and the intervening street in the SE corner of the excavation area, with further work on the stratigraphy and artefact assemblages. Work on the flotation and sorting of soil samples was completed.
Author
Catherine MORGAN
Bibliographic reference(s)
Unpublished field report, Netherlands Institute in Athens
Date of creation
2009-12-01 00:00:00
Last modification
2022-04-05 13:09:38
Picture(s) 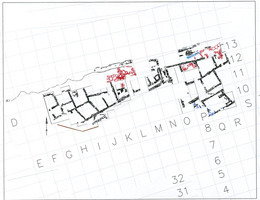