Key-words
Residence - Mosaic
Type of Operation
Excavation - Research excavation
Institution
ΙΒ' ΕΠΚΑ
Toponym
Nikopolis
Linked Record
199619981998 (1)19991999 (1)20002000 (1)20012001 (1)20022002 (1)20032003 (1)
Report
Nikopolis, House of Manius Antoninus. K. Zachos and Th. Kyrkou (ΙΒ' ΕΠΚΑ) report on the sixth excavation campaign, focused on completing clearance of the house and on determining the boundaries of the house and the width of the cardo which lay to the east of it.
In the northwest of the complex, ancillary rooms with hypocausts and water channels formed part of the private bath of the villa. To the south of these rooms, along the north side of the peristyle, were two rooms (XX and XXI) with floor mosaics. Only fragments of the border of the floor in room XX survive, depicting geometric and floral motifs (on the west side, for example, acanthus, lotus, a four-leafed clover and a griffin). The floor in room XXI survives in its entirety. The composition (in black and white) is a double hexagon on a white ground, with a cross in the centre, and triangles and lines radiating from it to form a complex polygon. Further hexagons run from the sides of the polygon, reproducing the central motif. Room XXII, to the east of XXI, is the antechamber of the private bath, forming the entrance to it from within the villa. Traces of a mosaic floor with geometric and floral decoration were found.
To the east of all these rooms lay the threshold and probable propylon of the villa (XXIII) – a second entrance which led directly to the peristyle (the main entrance lies on the south side of the complex).
Along the eastern boundary of the complex, a 50m-long stretch of the cardo was exposed (7.39m wide). Only a few paving stones were left in situ, the majority having been removed for the seventh-century AD cist graves found all along the east side of the complex and in the area of the bath. In the south east area, regularly spaced bases found in situ may have supported columns for a roof over this part of the road. A large number of drainage channels and wells in this area link into the city’s sewage system, and a water channel was also found which likely supplied the villa bath. In the north east corner of the villa lay the monumental propylon of a neighbouring house which encroached onto the area of the cardo, perhaps at a time when the road had fallen into disuse or more probably reflecting some arbitrary construction.
Author
Catherine MORGAN
Bibliographic reference(s)
ADelt 56-59 (2001-2004) B5, 93-95.
Date of creation
2013-06-10 00:00:00
Last modification
2021-07-01 18:17:50
Picture(s) 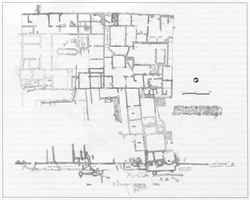 Fig. 1/ Nikopolis, plan of the House of Manius Antoninus. 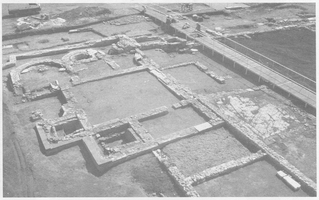 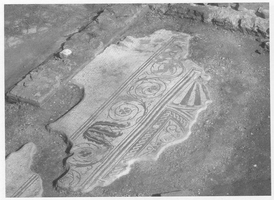 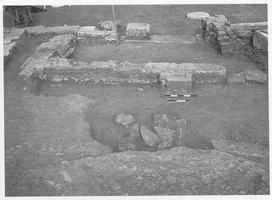 Fig. 4/ Nikopolis, House of Manius Antoninus. The propylon of the house.