Key-words
Figurine - Numismatics - Tools/weapons - Plant remains - Metal - Bone - Public area - Domestic space - Find Type - Material Type - Site Type
Type of Operation
Excavation - Rescue excavation
Institution
ΙΒ' ΕΠΚΑ
Toponym
Arta
Linked Record
2003
Report
Arta (anc. Ambracia), Karaiskaki Street (Veneti – Karagiorgou-Georgou Company OE property). I. Katsadima (ΙΒ' ΕΠΚΑ) reports on rescue excavation in the public/religious centre of the ancient city (Fig. 1: 276). A settlement insula was revealed, the standard 30m wide, bounded by two parallel streets (of which only parts of the pavement of that on the west and the retaining wall of that on the east survive) and containing building complexes separated by a drainage channel. The area was disturbed by Byzantine incursions attested by scattered rubbish pits. Construction over the western part of the plot in the 1930s caused further damage to the antiquities below.
The stone-built water channel, which ran northwest-southeast down the plot, had two construction phases - late Archaic-early Classical (represented in the northwest) and late Classical-early Hellenistic (in the southeast). In Byzantine times part of the east wall was removed at the south end to install two oil amphorae found in situ.
Settlement remains west of the channel were poorly preserved. The late Archaic-early Classical House A was identified in the northeast corner of this area: finds here include a Protocorinthian pyxis, a bronze hook and seven bronze arrowheads. Little survives of the first phase of Building B to the north, apart from the south exterior wall and interior walls defining six rooms: room 2 contained an enchytrismos with a pit containing a fifth-century foundation offering next to it. Bedrock is visible across this area, with local handmade and Geometric sherds found in hollows in the surface. In a later, late fourth-century, building phase, the building underwent modification. A remodelled room 6 contained a pebble floor: Hellenistic pottery from the destruction deposit dates the last phase of use. The quality of the masonry of the external wall during this phase may indicate a public function. A modern well was dug into the area.
Settlement remains east of the channel were better preserved. House Γ lay in the northeast corner, with two rooms preserved within the excavation area. The first (Γ 1) contained the debris of domestic activity (12 loomweights and a spindlewhorl). The second (Γ 2) had a pebble pavement, and five late fifth-century miniature vases four of which were found on the floor. A foundation offering of the last quarter of the fifth century at the north edge of the plot contained seven plain miniature vessels and a few pebbles, shells and bones. A paved alley separated this house from the neighbouring House Δ, which was in use from Archaic to late Hellenistic times, with many alterations and extensions. The north and west exterior walls bordered the alley and central channel; the original south boundary of the house was the water channel which separated it from House E to the southeast, but this was extended further south in the late fourth-early third century. The first, late Archaic-early Classical, construction phase, is represented in rooms Δ1-3 and the pebble-paved corridor Δ4: inside Δ2 was a pithos and outside it a small round hearth. A second, late fourth-/early third-century phase of construction and remodelling of the house was marked by a building sacrifice (noting a burnt deposit with miniature vessels on the east side of Δ4. The house was extended to the south. A courtyard (Δ5) was laid out, with a well and two rooms to the south of it (Δ6, 7, the latter containing two foundation offerings one of which held 130 miniature vessels, terracotta figurines and relief plaques, a terracotta model fruit, bone and three carbonised seeds). The channel that formerly divided Houses Δ and E was filled, and the houses united. Despite extensive damage to the southeast part of this complex in post-Byzantine times, two further rooms, Δ8 and 9, were traced. Δ9 was an andron with a plaster floor for couch settings around the walls, and a pebble floor mosaic in the centre of the room. The floor has, from the exterior inwards, a spiral border, a border of linked palmettes, and a rectangular composition with a spiral border and four palmettes set around an eight-point star. On the floor, beneath a dense destruction deposit of Laconian-type tile, was a coin of Ambracia, an Akarnanian issue of 229BC with the head of Heracles on the obverse and Apollo Aktios on the reverse, which dates the destruction of the room to the end of the third or the beginning of the second century BC.
Finds include terracotta figurines and plaques, pieces of votive altars, two andesite millstones, a large quantity of bronze and iron objects, and two silver and 135 bronze coins.
Author
Catherine MORGAN
Bibliographic reference(s)
ADelt 56-59 (2001-2004) B5, 88-91.
Date of creation
2013-06-10 00:00:00
Last modification
2018-08-22 09:24:39
Picture(s) 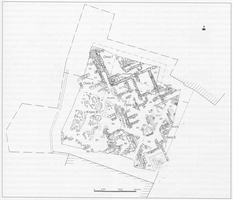