Key-words
Road system/waterway - Domestic space - Site Type
Type of Operation
Excavation - Rescue excavation
Institution
ΙΒ' ΕΠΚΑ
Toponym
Arta
Linked Record
2002
Report
Arta (anc. Ambracia), Bizaniou Street (D. Phouka and E. Pappa property). P. Gouni (ΙΒ' ΕΠΚΑ) reports the discovery of late Classical-early Hellenistic construction in an area where activity dates back to the early sixth century. (Fig. 1: 272). Late Byzantine rubbish pits represent the latest activity here.
A 4m-wide section of one of the main north-south axial roads through the city was exposed, with remains of two roadside buildings. The road fabric consisted of sherds and tile in sandy gravel, and a stone-lined drainage channel ran along the north side. This road was initially laid during the Archaic period. The exterior wall (with a street door) and three rooms of the southwest house were revealed. The central room of the house dates to the final, Hellenistic, phase of occupation. At a greater depth lay walls of the late fourth-early third, and the second half of the sixth century, indicating the progressive widening of the room towards the west. Three rooms of the northeast house were found (of which I and II intercommunicate). Room II had a paved floor under which a pit contained a foundation deposit (miniature vessels including amphoriskoi, phialae, exaleiptra, lids, a lamp etc.) of the late fourth – early third century BC. A second, contemporary offering pit was found in the east part of this area. In the middle of the east wall of room III was a stone structure of uncertain function.
Author
Catherine MORGAN
Bibliographic reference(s)
ADelt 56-59 (2001-2004) B5, 52.
Date of creation
2013-06-10 00:00:00
Last modification
2018-08-22 09:24:39
Picture(s) 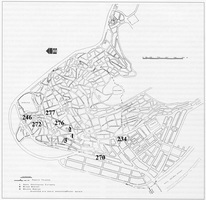 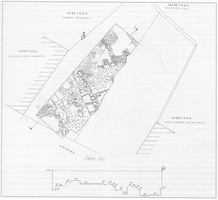