Key-words
Port - Cemetery - Site Type
Type of Operation
Excavation - Rescue excavation
Institution
ΙΒ' ΕΠΚΑ
Toponym
Kalligonio
Linked Record
200020012001 (1)2002
Report
Leukas, anc. city. G. Pliakou (ΙΒ' ΕΠΚΑ) reports the discovery of settlement remains during pipe-laying along the Leukas-Nidri road, which runs along the length of the ancient city. (Fig. 1: 1α).
Inside the fortification: traces of five walls and a water channel from a settlement block of the ancient town were found in a trench which ran at right angles to the putative line of the fortification (which was not located). (Fig. 2).
Spasmeni Vrysi, Karyoti (outside the fortification): tombs from the southeast edge of the south cemetery (four limestone slab cists, five tile graves, and a monolithic limestone sarcophagus) were found in two retaining banks for the modern road. (Fig. 1: 1β).
Lygia (ca.2km south of the fortification): east of the modern road, near the coast, remains of installations associated with the ancient harbour were found in five locations (Fig. 1: 1γ). These comprise: in Sector A, a probable ship-shed for smaller vessels (if the identification is correct, this indicates that the ancient coastline lay considerably further inland than the modern shore), and fragmentary remains of a structure lined with hydraulic cement to the east (Fig. 3). In sector B, two intersecting roads with drains, and parts of three buildings, were found ca 40m east of the ship-shed and 100m from the modern east shore (Fig. 4): the large quantity of transport amphorae found indicates that the buildings were commercial warehouses (Fig. 5). Sectors Γ, Δ and Ε, ca 200m north of sector B, produced isolated sections of walling, that in sector E (using many spolia) probably from a public building.
Author
Catherine MORGAN
Bibliographic reference(s)
ADelt 56-59 (2001-2004) B5, 36-39.
Date of creation
2013-06-10 00:00:00
Last modification
2018-08-22 09:24:39
Picture(s) Fig. 3/ Leukas, Lygia. Sector A, plan of the excavation.

Fig. 4/ Leukas, Lygia. Sector B, plan of the excavation. 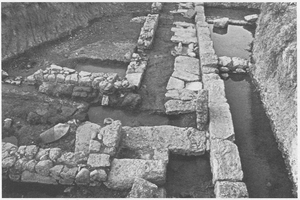