Key-words
Numismatics - Metal - Domestic space - Road system/waterway - Find Type - Material Type - Site Type
Type of Operation
Excavation - Rescue excavation
Institution
ΙΒ’ ΕΠΚΑ
Toponym
Arta
Linked Record
2001
Report
Arta (anc. Ambracia), Kyprou Street (Bouka property). A. Angeli (ΙΒ’ ΕΠΚΑ) reports the discovery of a section of street (7m long and 4m wide) running north-south, with an Archaic building along the west side. This is the southward continuation of the street previously excavated on the Lakka property. In its final, Hellenistic, phase the surface consisted of packed stones, tile and sherds in a bed of sand and stones. Two previous phases were found – a Classical surface of stones and sand, and an Archaic with stone paving and large stones. To the west were a Hellenistic floor (of stones and tile) and a wall, neither related to other building remains in the area. Along the west side of the Archaic road lay the poorly preserved remains of a contemporary house, the walls of which were founded in a layer containing Geometric pottery (but no associated building remains).
A round, stone-built post-Byzantine rubbish pit in the west corner of the plot was full of pottery of that period: a second pit was cut into the road surface.
Finds include a group of miniature vessels, two bronze bracelets, bronze coins of Ambracia (238-168 BC) and a silver coin of the Thessalian League with Zeus on the obverse and Athena Itonia on the reverse, with the legend ΘΕΣΣΑ/ΛΩΝ (196-146 BC).
Author
Catherine MORGAN
Bibliographic reference(s)
ADelt 56-59 (2001-2004) B5, 12-13.
Date of creation
2013-06-10 00:00:00
Last modification
2018-08-22 09:24:39
Picture(s) 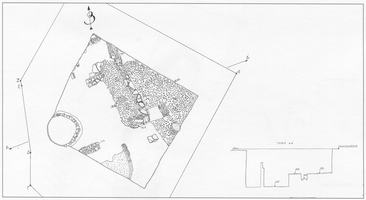