Key-words
Numismatics - Production/extraction site - Find Type - Site Type
Type of Operation
Excavation - Rescue excavation
Institution
ΙΒ’ ΕΠΚΑ
Toponym
Arta
Linked Record
20002001
Report
Arta (anc. Ambracia), Garoufalia Street (Ch. Theodorou property). A. Angeli (ΙΒ’ ΕΠΚΑ) reports. In the late fourth or early third century BC, an olive oil production workshop was opened on the edge of the southwest cemetery of Ambrakia. This was destroyed at the start of the second century: a new workshop built on the same site continued in use through the Hellenistic and Early Roman period, being destroyed at the end of the first/early second century.
In the final excavation season in 2001, removal of a destruction layer in room E revealed a well-compacted floor of cement with tile fragments and small stones, which slopes gently towards the centre of the room. The slope, the coating of the walls in lime plaster, and the lack of pottery or portable finds indicate that the structure was a tank for washing olives. A destruction layer containing tile and plain pottery (mainly sherds of storage vessels, amphorae and basins) was also removed from room Z, in the centre of which was an open Π-shaped hearth of small limestone slabs and tile with a floor of unfired clay. More extensive evidence for an earlier phase of the complex was uncovered, indicating that while it covered the same area, the arrangement of rooms differed. Beneath rooms Z and Δ1 in the north part of the complex lay a floor of hydraulic cement contained within four walls, probably a cistern, with a further room to the north. Bronze coins and pottery (storage vessels, chytres, kantharoi and skyphoi, early examples of West Slope decoration, and a few sherds of black-glazed plates and lamps) date the first phase of the complex to the end of the fourth and the third century. The function of the complex as an olive press is confirmed by the large quantity of olive pits found throughout the excavation. Pottery in the destruction level across these rooms (sherds of storage and domestic vessels, a few moulded bowls, skyphoi and plates in grey ware) dates to the beginning of the second century BC.
Author
Catherine MORGAN
Bibliographic reference(s)
ADelt 56-59 (2001-2004) B5, 7-10.
Date of creation
2013-06-10 00:00:00
Last modification
2018-08-22 09:24:39
Picture(s) 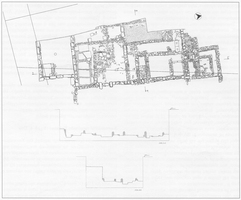 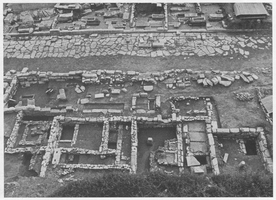 Fig. 2/ Arta, Garoufalia Street. General view of the excavation from the west.