Key-words
Bath - Altar - Fountain - Religious building - Hydraulic installation
Type of Operation
Excavation - Research excavation
Institution
DAI
Toponym
Kerameikos Excavations, Céramique
Linked Record
1988198919901991199219931994199519971998199920002002200420052009201120122013201620192021
Report
Kerameikos. J. Stroszeck (DAI) reports on excavation at two locations (Fig. 1).
Investigation of the water supply to the Round Bath continued (Fig. 2). Three fifth-century BC cisterns (Z 18, 19 and 21), which belong to the first phase of the bath, were completely exposed. They differ in design and function from the fourth-century installation examined in 2011 (Figs 3-6): their chambers were dug as cylindrical holes into the clay, then underground passages (with tapering ceilings) were tunnelled between them from the bottom of the shafts (Fig. 7). The entire system was then coated with waterproof mortar. The levels of the three cisterns rise continuously from Z 18 to Z 21 and then Z 19 (the bottom of Z 19 being 0.37m higher than that of Z 18). The system was supplied from a public water line under the Kerameikos street in Z 18: the rising levels probably served to purify the water, with suspended particles settling into Z 18 and 21, and the purified water then drawn from Z 21.
Documentation of the two well-dated cistern facilities at the Round Bath before the Dipylon allows for the first time comparison between an Athenian cistern system of the second half of the fifth century and one of the fourth. Differences in construction, in the composition of the waterproof mortar, and in function reflect greater experience in hydraulic engineering.
At the Hekateion (which as of 2015 is safely identified as the sanctuary of Apollo Paian), cleaning served to verify and supplement the results of older excavations at Fountain A and in the region of the cult niche up to the altar (Fig. 8). Fountain A is an approximately square monolithic well-head of Piraeus limestone laid on a rubble socle. Holes are visible for a lifting device by which a frame enabled water to be drawn Fig. 9). The block-shaped altar (Fig. 10) was later moved further south as a two-tier structure which, given the height of the steps (0.31m), more likely served for the preparation of offerings than as a staircase. The altar platform was placed in its current position only after the 1890 excavation. Between the altar and the cult niche is a rectangular enclosure with a marble omphalos in the centre (Fig. 11) made from the inverted lower part of a grave lekythos. During the first excavation, the omphalos was surrounded by a brick enclosure, covered, along with the lower part of the omphalos, with a layer of stucco. This is now missing, enabling us to observe that the omphalos is recessed into the circular opening of a marble slab. As with the mouth of Fountain A, this marble slab sits on a rubble base. Originally there was probably a fountain here, to whose mouth the omphalos was added.
Author
Catherine MORGAN
Bibliographic reference(s)
DAI Report
Date of creation
2013-03-15 00:00:00
Last modification
2021-08-27 08:21:00
Picture(s) 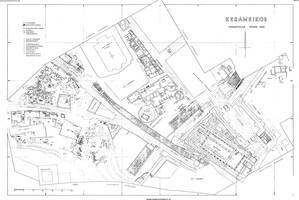 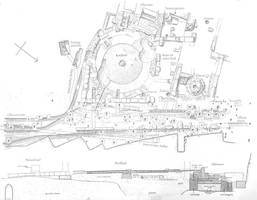 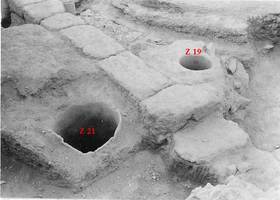 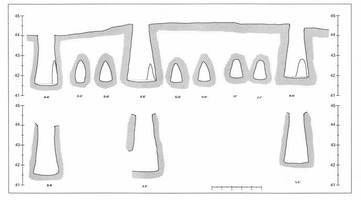 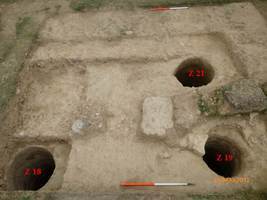 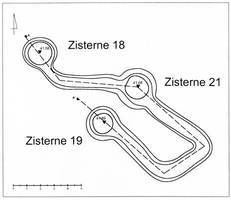 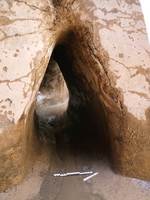 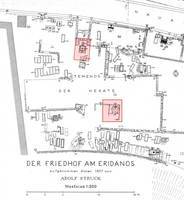 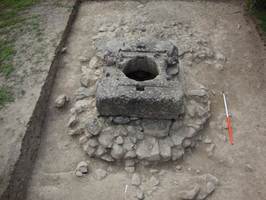 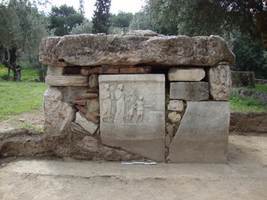 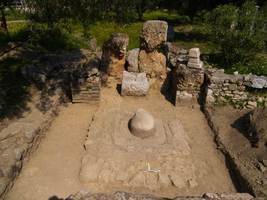