Key-words
Public area - Domestic space - Site Type
Type of Operation
Excavation - Research excavation
Institution
Austrian Archaeological Institute in Athens
Toponym
Aigeira
Linked Record
2011
Report
Aigeira. W. Gauss (Austrian Archaeological Institute in Athens) reports on the 2011 excavation season.
On the Solon terrace, a large building (studied since 1998 by the Institute Director, G. Ladstätter) was erected in the mid-fourth century BC, expanded at the beginning of the third century with the addition of an annexe, and abandoned after further modifications in the Late Hellenistic period. It is characterized as a public guest house throughout this period, noting several andrones and bathing facilities (Fig. 1). The final season of excavation, which completed work on the building, focused on the northwest part of the first construction phase: excavation continued from the level of the foundations down to stereo.
Excavation on the so-called saddle resumed after an almost 30-year hiatus. Campaigns in the 1970s under the direction of W. Alzinger had demonstrated the importance of the acropolis in particular during the Late Bronze Age. Work in 2011 revealed Late Bronze and Early Iron Age settlement on the saddle below the acropolis, as well as new evidence of massive walls on the south and southeastern acropolis slopes which probably served as ramparts (Fig. 2). A Late Bronze Age (LH IIIC) stratum found in one area contained, in addition to characteristic Mycenaean wheelmade pottery, a notable proportion of handmade burnished ware (Fig. 3). Elsewhere the first evidence was found for Late Geometric and Early Archaic occupation on the saddle – the fine pottery includes Corinthian styles such as the Thapsos class and Protocorinthian sherds (Figs 4, 5).
A planned comprehensive reappraisal of the old excavations in the area of the theatre and the Hellenistic naiskoi necessitated a review of the finds (which was begun but not completed). A preliminary review of the sequence shows surprisingly few prehistoric, pre-Mycenaean and Late Geometric to Archaic sherds in the theatre area. The proportion of late Classical black-glaze and West Slope is low, but red-glaze, the so-called West Slope successor wares and relief pottery are more common. The majority of the pottery dates to the Hellenistic – (Early) Imperial periods. Table- and cookwares appear in approximately equal proportions in this context, along with amphora sherds. Ceramics, which can be clearly assigned to the Middle Roman period, especially Sigillata and moulded lamps, are much rarer. A notable find from the theatre area is a collection of some 20 mould fragments for relief bowls, plus a greater quantity of kiln supports and wasters (Figs 6-8), which indicate the likely existence here of a Greek-period pottery workshop.
Author
Catherine MORGAN
Bibliographic reference(s)
Austrian Institute Report
Date of creation
2013-03-14 00:00:00
Last modification
2018-08-22 09:24:38
Picture(s) 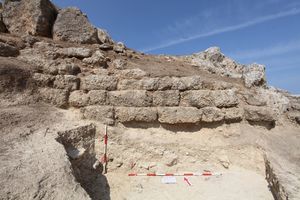 Fig. 2/ Aigeira, Wall at the foot of the acropolis, view from south to north. 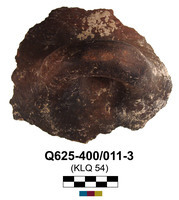 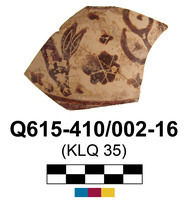 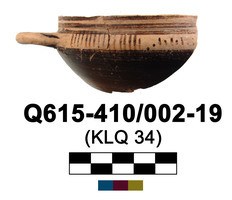 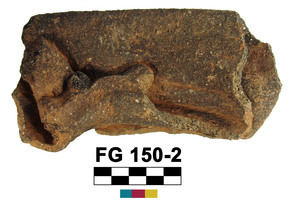 Fig. 6/ Aigeira, waster from the area of the theatre.

Fig. 7/ Aigeira, firing support from the area of the theatre.

Fig. 8/ Aigeira, mould for mould-made bowls from the area of the theatre.