Key-words
Figurine - Agricultural facility - Tools/weapons
Type of Operation
Survey
Institution
BSA: ΚΑ' ΕΠΚΑ: 2nd EBA
Toponym
Keros, Keria, Karos, Kereia
Linked Record
20122013
Report
Keros Island Survey. C. Renfrew (BSA/Cambridge), M. Marthari (Director Emerita KA' ΕΠΚΑ) and C. Dellaporta (Director, 2nd EBA) report on the first season of intensive survey.
The island was divided into 1584 one-hectare tracts, each sub-divided into five 20m segments. 18,082 segments were walked in 540 tracts: 34,306 sherds and 2,455 obsidian fragments were counted, and 1,903 sherds and 220 special finds collected. An intensive sampling methodology was adopted at two areas of interest (termed polygons): Polygon 1 was centred on modern Konakia and Polygon 2 lay further west on the north coast. Complete collection was carried out in 5m2 circles, with diagnostic ceramics and other special finds collected in 100m2 squares.
Geological and geomorphological study focused on the creation of a new geological map and cross-sections of the island, and the recording of geomorphological features, soil types and land-use practices. Single column profiles from exposed sections were cleaned, and the stratigraphic units described and sampled for grain size, organic carbon and calcium carbonate content to investigate depositional history and soil formation processes. C14 samples were taken where cultural material was noted. Specific exposed profiles were sampled for soil micromorphology and OSL dating. Geomorphic maps are being constructed for areas of archaeological investigation. The extensive terracing systems were also investigated: exposed profiles were recorded and sampled for sedimentological analysis and dating. Coring was conducted in specific terrace infills and foundations.
Preliminary chronological classification reflects the generally low presence of diagnostic feature sherds. Sherds classified as ‘Neolithic to Bronze Age' occur throughout the surveyed area: concentrations were found just north of the Kavos promontory, in the Gerani Beach area and under the modern site of Konakia. A fragment of EBII Talc Ware was found at Konakia. There is also strong evidence for a concentration of “MBA-LBA” sherds in the Gerani Beach area, with significant numbers of tripod cooking pot legs of Minoan type, and a bridge-spout from a jar. Many of these cooking pot legs are manufactured in the distinctive ‘patelia’ fabric known to originate from Amorgos (the ‘Dark Phyllite’ fabric from Kavos): few, if any, fabrics appear compatible with production on Crete itself.
Gerani and Konakia had dense sherd concentrations of particular periods. The low-hilltop of Gerani produced much Hellenistic black-glaze, while Konakia produced a significant range of pottery compatible with a Late Roman to Early Byzantine date, including numerous amphora handles of various types, beehives and African Red Slip. Both sites also had a smaller range of sherds of other periods, indicating a complex settlement pattern for the whole north central coast stretching sporadically from the Neolithic-Bronze Age until modern times.
Nine Early Cycladic figurine fragments were found, five in the Kavos area, three at Konakia and one near a recent household (‘tou Markou’) in the mountains above Konakia. Several worked marble bowl fragments were also recovered from Konakia and tou Markou, as well as a fragment of a very large palette. A few stone discs and flint tools were collected. The obsidian collection includes a number of irregular and wide blades as well as bladelet cores, and some irregular points and scrapers: it clearly differs from the well-ordered blade industry recovered from Dhaskalio and Kavos. It includes obsidian from Giali.
The emerging diachronic picture indicates a wide spread of cultural material and terracing systems over much of the northwest coastal region, extending to a significant extent inland. Since the sea level was ca. 3.5-5m lower during the Early Bronze Age, Bronze Age material now on the shore (where not washed down) relates to areas formerly inland. Terracing includes water management systems, sediment capture systems, and agricultural terraces. While these terraces are not yet dated, an initial impression suggests that in the Early Bronze Age, Archaic to Classical, and Roman periods, intensive terracing was utilised widely. There is a clear difference in habitation and use between lowlands and uplands. On the southwest side of the island, levels of cultural material are generally low and usually located close to sea level. Several important exceptions include the area known as Megalo Kastro.
A three-aisled church with three apses was recorded at Konakia, and a rectangular tower on the top of the low hill of Gerani. In addition to two houses and stables at Konakia, structures noted include a dairy farmstead at Mourisma to the south of Megalo Kastro, and animal pens in Gerani in Azoiria. Two wells remain in use at Gerani and at Vlyhada to the south, plus cisterns at Konakia and close to the church of the Panagia.
In the southeast of the island is evidence of a post-medieval farming system on a high-elevation plateau which contrasts with the relatively poor agriculture land elsewhere. There are indications of prehistoric agricultural exploitation but not yet concentrations of population comparable to those now well-established in the region of Konakia on the island’s northwestern slopes.
Author
Catherine MORGAN
Bibliographic reference(s)
Unpublished BSA Report
Date of creation
2012-12-21 00:00:00
Last modification
2021-04-16 02:56:04
Picture(s) 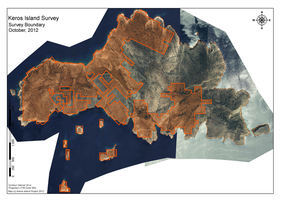 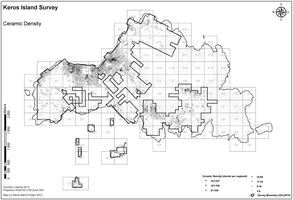 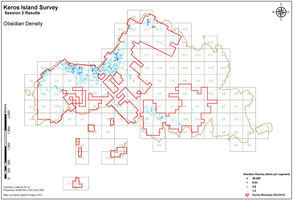 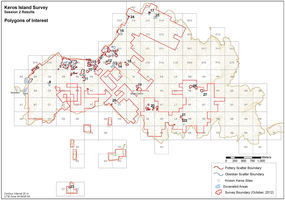