Key-words
Residence - Inscription - Religious building - Domestic space - Building Type - Find Type - Site Type
Type of Operation
Excavation - Research excavation
Institution
American School of Classical Studies at Athens
Toponym
Gournia
Linked Record
201020112013
Report
Gournia. V. Watrous (ASCSA/Buffalo) reports on continuing excavation.
A Protopalatial street, lined with houses was uncovered northof the excavated town. A small platform at the street-edge may have been a shrine: conical cups and various vases for drinking, eating and cooking were found, plus a pot containing limpet shells and a miniature jug with a possible Linear A inscription. Many animal bones and some pumice were retrieved.
The Palace wall, exposed in the north of Room 13, had a base course of small stones which may either remain from an earlier phase or be a levelling course for the Cyclopean blocks above. A deposit of over 120 LM IB vases, mainly conical cups, was found in Room 13 in dark, ashy soil, with pumice, plaster and animal bones scattered around and in them: traces of fire were revealed. Along the north wall of the room, a shelf holding vases had apparently collapsed. Soon after this destruction, two walls closed off the northeast corner of the room: this area contained some 150 (largely complete) MM IIIA vases, larger conical cups, rounded and Vapheio cups, and some ledge-rimmed bowls. These two deposits are cultic in nature, located close to the stone baetyl and a kernos. The MM IIIA deposit dates the construction of the Palace earlier than LM IB as suggested by Boyd Hawes.
In the southwest of the Palace excavation in the north part of Room 18 (the Room with the Kernos) aimed to discover remains below the LM I floor and to investigate the date of the palace construction. A wall under the LM I floor (previously found by Hawes), which runs on a different, northwest-southeast orientation, was further revealed. Solidly built (0.8m wide), it is associated with stratified Pre- and Protopalatial deposits. The south face of this wall was also found, built of a row of large boulders. To its north, under a spread of thin layers of fill and rock tumble from the walls and ceiling, a smaller wall at right angles forms a corner with it. This has a low, narrow bench on its east face. The floor is carefully made from water-worn pebbles (Fig. 1): on it were several stone tools and small, worn sherds. The fill following the abandonment was Protopalatial in date, but soils with the pebble floor contain late Prepalatial pottery. The pebbly earths below the wall contain late Prepalatial and Protopalatial pottery.
In the town, north of House Ea, were the remains of four structures that can be traced through four major occupation phases. Phase 1 comprises the EM III ‘Early Building’ with at least two rooms. Phase II consists of a massive structure with a cobbled court, set over the Early Building and dated to MM IA and later in the Protopalatial period. One interior space required columns or partition walls to support the roof. A space to the west of the Early Building may have housed larnakes; there was a vat in the yard to the northeast.
Phase III is a large, single-storeyed Protopalatial House, built in MM II. It originally had access to two cobbled courts, to the north and at a higher level to the south (two ‘cobbles’ in the south court are kernoi). The main entrance, at the southwest, was flanked by large brick jambs: a substantial pivot stone for the door was found in situ against the north jamb. Occupation was relatively brief. Sherds of some 15 vessels strewn on the floor from west to east had fallen during a destructive event, probably an earthquake. Outside the building were more smashed vessels including cups and jugs around a large, intact spouted vat. Loomweights and spindle whorls, plus a stone pestle, were recovered here. After the destruction, a new floor was laid 0.1m above the old floor. A second disaster (again perhaps an earthquake) soon struck: on this later floor were a pierced stone weight, a clay stamp seal, and five MM II cups. The Protopalatial House served both domestic and industrial functions in its first phase (noting evidence for pottery production), but was purely domestic in its second (noting evidence predominantly of drinking). Weaving was carried out in and around the building.
Mycenaean House He was shown to have been built in LM IIIA1/2. Of the two interior floors, one dates to the initial construction and the other to LM IIIB (when a massive stone threshold was inserted).
The discovery of MM IIB pottery under a Neopalatial street indicates that the street system was probably set out at the start of the Neopalatial period (MM IIIA), when the town was reorganized and rebuilt.
The seals and impressions recovered include:
a.11.138. Clay stamp seal with flanged handle from the Protopalatial House, later floor deposit (MM IIA context). Motif: from the impression: a retorted spiral (as a maze or labyrinth).
b. 10.452. Lentoid (diameter 1.86cm), a chance find from the Pit House, northeast corner. Red-brown limestone. Stringhole horizontal. Goat stands left in PT 1A, with double jagged horns in front: a vertical line below: a large dot above a smaller one: animal face/simple bucranium without horns. Cretan Popular Group (LM I). Horizontal stringholes can signify special qualities for seals, but a good parallel for this seal in both shape, material, motif, and style comes from Episcopi Pediados and it too has a horizontal stringhole, CMS II 4.21 (MM III-LM I context).
c. 11.138. Conical nodulus of dark brown, finely levigated clay from Trench 9, Locus 3, Pail 3. Impression of a lentoid of hard stone: two bulls run in PT 36 counter-clockwise, their heads stretched forward, bellowing. For the composition, cf. CMS I 53 from Mycenae Chamber Tomb 10. The clay is almost certainly Knossian (CMS II 8, 94-100, probably belonging to group A1), and the seal that impressed the nodulus palatial in quality.
Author
Don EVELY
Bibliographic reference(s)
Unpiblished field report, ASCSA.
Date of creation
2012-09-26 00:00:00
Last modification
2018-08-22 09:24:38
Picture(s) 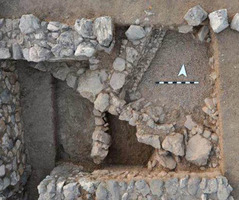