General Information
Record ID
2813
Activity Date
2011
Chronologies
Key-words
Type of Operation
Survey
Institution
BSA
Toponym
Knossos, Knosos, Cnossus, Cnossos
Linked Record
201020112014201520182019
Report
Knossos, Lower Gypsades. J. Bennet (BSA/Sheffield), E. Hatzaki (Cincinnati) and A. Bogaard (Oxford) report on resistivity survey of selected areas within the earlier magnetometry survey (AR 57 [2010–2011], 71) (Fig. 1) with the aim of using both sets of results to identify areas for potential future excavation. (Fig. 2). The focus was on Areas 1 and 3, where magnetometer survey had shown general anomalies. This gave a broad, continuous transect from the Vlyhia stream bed in the north up slope to the gypsum quarry at the southern boundary, which probably marked, or lay beyond, the southern limit of habitation.
In Area 1, a linear, high-resistance feature runs for some 90m from NNE to SSW, starting at the northern boundary of the area and stopping at an existing structure (Fig. 3). Results indicate a relatively shallow feature, 1.5-0.75m below the present surface, perhaps an unpaved roadway. There is no clear evidence of structures on either side of the feature, although these might be suggested by the short, transverse anomalies visible. If so, then the feature would be a street with buildings on either side. The absence of other similar features in this area suggests that this was the only street running up the hill. It is also possible that evidence has been lost to erosion, stone-clearance and cultivation, or that this area was substantially open and above the settlement, traversed from north to south by a road leading to the quarries and tombs. Further anomalies in the south part of Area 1 may indicate ancient quarry workings downslope from (north of) the remains visible today. If so, this may explain why the linear feature observed in resistivity survey to the north does not continue in this area to the south.
In Area 3 it was suspected that archaeological features might have been invisible in magnetometer survey because of their depth (Fig. 4). Anomalies in the northeast quadrant appear to bound a ca. 25x20m area; it is possible that the two, north and south halves of the anomaly each represent substantial terrace walls rather a single platform or the remains of a large building. Since remains of ‘house walls’ were seen as early as 1900 along the edge of this area, only 50-60m distant to the northeast, these anomalies may represent similar walls higher upslope. In addition, there are high-resistance features in the southwest area, less clearly defined but possibly indicating sub-surface structures, and also on the southeast edge, at the property boundary adjacent to the general area of Hogarth’s Houses. This suggests that structures continue west of the original site into Area 3.
Fig. 5 summarises results from the survey in other areas. North of the main road, Area 10 revealed a strong, high-resistance feature running up the slope. It is therefore unlikely to be a terrace wall, but was perhaps either a road across the Vlyhia or connected with water management. In Area 12, survey adjacent to the 1992 excavation of a section of Minoan settlement (AR 44 [1997-98], 114) suggests walls continuing west of the excavated area, confirming the existence of further structures in the area. Results in the west of the area were less conclusive. In Area 15, where magnetometer survey had identified possible tomb signatures, resistivity survey suggests that these may rather represent the top of a geological feature.
Although fieldwork is now complete, the interpretations proposed here are preliminary, in advance of final, full evaluation of the results.
Author
Don EVELY
Bibliographic reference(s)
Unpublished Report.
Date of creation
2012-09-24 00:00:00
Last modification
2018-08-22 09:24:38
Picture(s) 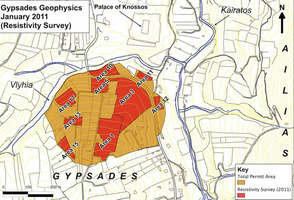 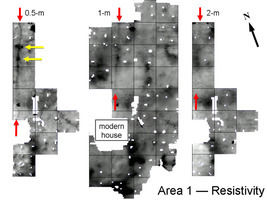 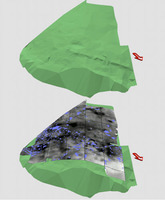 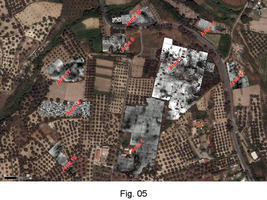