Key-words
Residence - Figurine - Hearth/Kiln/Oven - Tools/weapons - Dress and personal ornament
Type of Operation
Excavation - Research excavation
Institution
ASA
Toponym
Anogeia
Linked Record
198819892004200620072008200920102011201220132014201520162017201820192020
Report
Zominthos. E. Sapouna-Sakellaraki (ASA) reports on continuing excavation of the Central Building. Room 19 (the staircase room, Fig. 1) had at least two floors; rooms 28 and 49 had an upper floor (traces of the floor beams were preserved in room 49). Among the numerous finds from room 49 were fragments of rhyta, conical cups, daggers, bone pinheads, and a clay sealing. Finds from room 28 were equally rich – a large quantity of vessels (mainly conical cups), a lamp, a thymiaterion, beads of a variety of stones from a necklace, bronze pins, two steatite sealstones (one depicting a water bird and the other a lion), and a bronze figure of a worshipper. (Fig. 2). In the easternmost rooms 29 and 30, characterised by the excavator as the central court of the complex in LM I, a Roman addition had previously been discovered. Continued investigation reveals Geometric and Archaic interventions (as indicated by an aryballos), as well as Classical, Hellenistic, Byzantine and Venetian pottery. Following the removal of fills of these later periods, and of the LM IA destruction level, an Early Palatial building was revealed, probably with two storeys, a paved floor, and a porch with two column bases preserved in situ (Fig. 3). An orthogonal altar was surrounded by bovine bones, with terracotta bull horns nearby probably from a rhyton. West of the porch in room 50 was a round hearth with a terracotta surround decorated with an impressed spiral pattern, and a column close to the hearth. In front of the hearth was a small piece of gold sheet with an incised depiction probably of a ship (Fig. 4).
In room 7 the paving slabs of the upper floor were found preserved after its collapse, while room 8 contained pieces of painted wall plaster.
Author
Don EVELY
Bibliographic reference(s)
Ergon (2011) 41-43.
Date of creation
2012-09-20 00:00:00
Last modification
2022-03-11 04:32:02
Picture(s) 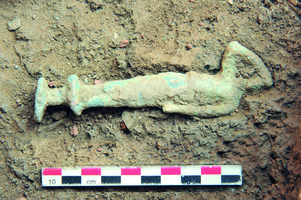 Fig. 2/ Zominthos. A bronze figure of a worshipper. 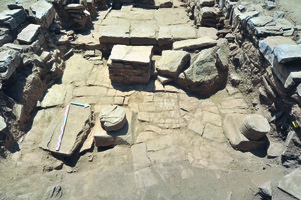 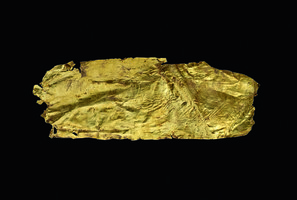 Fig. 4/ Zominthos. A small piece of gold sheet with an incised depiction probably of a ship.