Key-words
Inscription - Cemetery - Production/extraction site - Find Type - Site Type
Type of Operation
Excavation - Rescue excavation
Institution
ΚΣτ’ ΕΠΚΑ.
Toponym
Salamis, Koulouri
Linked Record
2004
Report
90 E. Venizelos Avenue (property of E. Gika, O.T. 81). M. Pologiorgi (ΚΣτ’ ΕΠΚΑ) reports the discovery of Middle Geometric to Late Roman remains on a plot which had previously produced fifth-century pithos burials.
A Middle Geometric slab cist with a pebble floor and containing a skyphos was largely destroyed by modern construction. Geometric sherds were also found in one large hollow in the bedrock, and Classical sherds in another.
A child burial in a terracotta larnax (fig. 1) contained a lidded pyxis (fig. 2), a black-figure lekythos and a black-glaze skyphos (dating the burial to the second quarter of the fifth century BC), while an enchytrismos in an amphora ( fig. 3) contained a lekanis and lid (fig. 4), an olpe, and a black-glaze skyphos of the first quarter of the century.
In the late Classical period the area was occupied by a workshop for purple dye from which a large quantity of shell survives. Shallow bedrock cuttings probably relate to the workshop.
Domestic pottery, beehives and a quantity of rooftile indicate a Late Roman farmstead. A long, east-west wall of unworked stone and spolia has a doorway with jambs of re-used limestone blocks from the bases of funerary monuments (fig. 5). A second wall likely made a corner with the first, but is broken by a later well. A probable retaining wall was found to the west. From fill (and perhaps later re-used) were the crowning block of a fourth-century Pentelic marble grave stele and a small part of the left side of what may be the body of the same stele with two lines of an inscription (ΔE [……] | Υ […...]).
Author
Catherine MORGAN
Bibliographic reference(s)
AD 56-59 (2001-2004), Chr. 481-483.
Date of creation
2012-07-24 00:00:00
Last modification
2018-08-22 09:24:37
Picture(s) 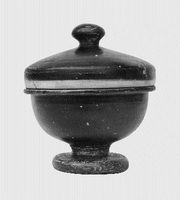 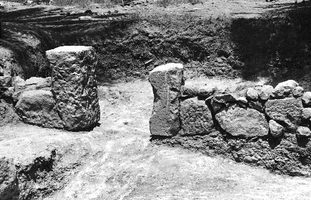