Toponym
Knossos, Knosos, Cnossus, Cnossos
Linked Record
198919901991199219931993 (1)200520062006 (1)200720082008 (1)2009201020112011 (1)2012
Report
Knossos Urban Landscape Project (KULP). M. Bredaki (Director, ΚΓ' ΕΠΚΑ), A. Vasilakis (ΚΓ' ΕΠΚΑ) and T. Whitelaw (BSA/London) report on the 3rd season of survey.
In 2005 the majority of the urban site, extending over some 1.5km2, was intensively surveyed. In 2007 walking moved into the low hills surrounding the city, on which the city’s cemeteries were located. A number have been identified and excavated, ranging in date from ca. 2,000 BC to 800 AD. Particularly notable are the groups of rock-cut tombs, from the later BA, the EIA and the Rom period. These are complemented by less substantial burials in pithoi, larnakes, pits and tile graves, as well as built mausolea of Rom date. Cemeteries of all phases ring the urban site and flank the Kairatos valley down to the harbour town.
The areas of known tombs in the S of the valley were surveyed intensively, from the Kephala hill in the N to Spilia, and from Fortetsa in the W to the upper slope of Aï Lias to the E. Some 7,000 grids (20m2) were intensively investigated, covering the core of the protected Alpha zone (Fig. 1). An estimated 60,000 sherds were recovered; approximately 30% of the recovered material has been preliminarily processed.
When it became clear that survey had extended well beyond the boundaries of the urban site and surface densities had dropped considerably, the field strategy was modified to increase the speed of coverage and the likelihood of encountering now rare material. Two 20m transects were walked across each square, usually along the W side and down the centre, to ensure scanning of the entire unit for features. An area 1m w. was scanned intensively along each transect for material, expanding to 40m2 the area in each unit actually searched, and increasing significantly the chances of encountering low-density material.
Excavations in the last Ct, both within the city and in the encircling cemeteries, have been quite patchy, with major work focusing in the area of the M palace, and rescue tests under the mod. villages and along the main road. This has left major areas of the site and the surrounding landscape uninvestigated. The excavations do, however, provide good data for areas not available for survey at the core of the site. Accordingly, the 2 investigation strategies are essentially complementary,
The area surveyed in 2005 extended to what was believed to be the probable boundary of the aggregate urban area; high densities of material were sustained up to that boundary on most sides (Fig. 2). Extending outwards, the 2007 fieldwork has defined more clearly the boundaries of the occupied area, as this shifted through time. Moving out into the hills, the continuous surface coverage serves to fill the significant gaps between the known clusters of tombs. Moderately dense distributions of ceramics, particularly to the W, on the acropolis and the S, up Lower Gypsadhes, suggest either that the fringes of the site shifted back and forth between occupation and burial in different phases, or that major areas of shallow burials, perhaps pithos cemeteries, have been destroyed by agriculture. These possibilities will be assessed through the detailed analysis of the nature of the assemblages recovered and may add a significant new element to the picture provided to date by the rock-cut chamber tombs which have been the focus of previous research.
In contrast to the material recovered in 2005, where 19.6% of the sample is represented by feature or decorated sherds, in the sample of 2007 material studied so far 27.8% of material falls within these particularly diagnostic categories. This presumably represents the better preservation of material protected for at least part of its lifespan in tomb contexts.
Of the 2,842 readily diagnostic sherds collected in 2007 27% are PH, 21% EIA−Hel, 17% Rom and 35% post-Rom. For the 55,672 sherds recovered in 2005 on the city site the comparable distribution is 19% PH, 48% EIA−Hel, 29% Rom and 4% post-Rom. Considerably more material was encountered on the surface in 2007 than had been anticipated. PH items are relatively more abundant in the periphery, where they are not so effectively masked by overlying EIA−Rom material. The predominance of post-Rom material, essentially off-site scatter from the last millennium following the abandonment of the urban site, reflects to a large degree the protection afforded to material buried in the rock-cut chamber tombs so common throughout the use of the cemeteries.
Author
Catherine MORGAN
Bibliographic reference(s)
Unpublished field report, BSA.
Date of creation
2009-12-01 00:00:00
Last modification
2021-07-29 13:44:52
Picture(s) 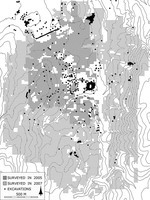