Key-words
Tomb - Residence - Basilica - Mosaic - Religious building - Building Type - Find Type
Type of Operation
Excavation - Rescue excavation
Institution
20th EBA.
Toponym
Sami, Samos, Aigialos
Linked Record
2006
Report
Loutro, Same (property of A. Vinieratou). The 20th EBA reports the discovery of an Early Byzantine house complex with several construction phases, founded on Hellenistic remains. The enchytrismoi of children were found in the west part of the house, one of which contained a golden earring.
At Ag. Dimitrios on the western edge of modern Same, an Early Christian basilica was partially excavated in 1995 and 2003. In 2006, the architectural form and external limits of the building were found. It is a three-aisled basilica with a semi-circular apse, narthex, exonarthex, and extension to the south. A more recent single-roomed chapel was founded over parts of the sanctuary and nave. Different construction phases were detected in the basilica walls. The sanctuary floor was paved, and the nave had a mosaic floor with geometric and plant motifs. In the north transpect was a cruciform pool. Two cist tombs (one bipartite) lay to the north of the apse, and a cemetery with tile graves was found to the east of the extension. Its full extent is unknown. A ceramic layer found to the south of the basilica extended into the neighbouring property of P. Voutsina.
Author
Catherine MORGAN
Bibliographic reference(s)
http://www.yppo.gr/0/anaskafes/pdfs/20_EBA.pdf.
Date of creation
2012-07-21 00:00:00
Last modification
2018-08-22 09:24:37
Picture(s) 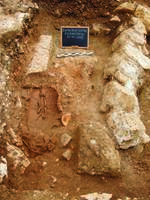