Key-words
Church - Tomb - Numismatics - Dress and personal ornament - Metal - Glass - Religious building - Building Type - Find Type - Material Type
Type of Operation
Excavation - Rescue excavation
Institution
26th EBA.
Toponym
Metamorfosis, Skarminga
Linked Record
2010
Report
Metamorphosi (formerly Skarmingas). Church of the Metamorphosis of the Saviour. The 26th EBA report on excavation conducted in advance of conservation work.
Following removal of a recent altar structure, excavation in the altar area revealed only a cutting in the bedrock which is probably connected with the collection of spring water which then drained into a water channel south of the church. Plain and glazed sherds were found in the fill (fig. 1).
In the nave, removal of recent flooring revealed an older cement floor on a stone bed. This was interrupted where one would expect to find a wall dividing the nave from the narthex, and here a trial trench revealed an older terracotta tiled floor. In the west transept was a cist grave (figs 2-3) which extended into the nave below the position of the dome: it is unclear whether the grave was contemporary with the original floor or a later insertion. It contained one burial in situ and one displaced. Below 0.5m the water table was encountered, complicating excavation, but the upper levels of fill contained much glazed pottery (figs 4-5), metal sheet, and numerous fragments of glass vessels. Around the skeleton of the main burial were 50 bronze coins, mostly of Manuel Komninos and Isaac II Angelos (figs. 6-7), which do not seem to have been deposited as a hoard as they are scattered throughout the fill. No intact vases were founded.
Excavation in the narthex (fig. 8) revealed three crudely built tombs without grave goods (figg 9-11). In the fill below the more recent paved floor were numerous plain, glazed and decorated sherds (fig. 12), a lead pectoral cross, metal sheet and fragments of glass vessels (fig. 13).
Author
Catherine MORGAN
Bibliographic reference(s)
http://www.yppo.gr/0/anaskafes/pdfs/26_EBA.pdf.
Date of creation
2012-07-21 00:00:00
Last modification
2018-08-22 09:24:37
Picture(s) 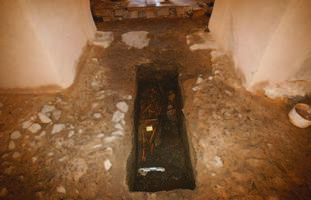 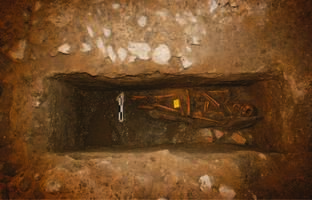 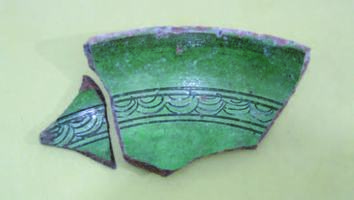 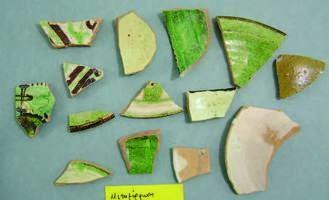 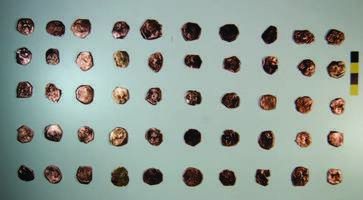 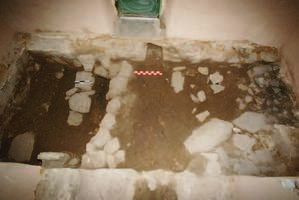 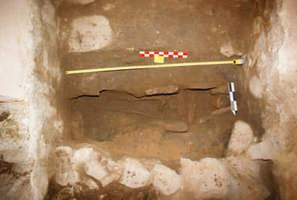 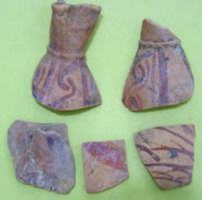 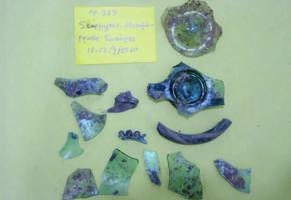