Key-words
Basilica - Numismatics - Mosaic - Metal - Glass - Religious building - Find Type - Material Type - Building Type
Type of Operation
Excavation - Rescue excavation
Institution
5th EBA.
Toponym
Sparte, Sparta, Lakedaimon, Lacedaemon
Linked Record
20062007
Report
Sparta, Alkman Street (Ο.Τ. 128, property of A. Biba and S. Spyridakou). K. Diamanti (then Director, 5th EBA) reports on rescue excavation in 2007 which revealed the mosaic floor (fig. 1) and foundation of the apse (three-sided on the exterior and curved on the interior, oriented southeast) of an Early Christian basilica probably of the late fifth or early sixth century AD. The apse was built of unworked stones and cement with tile in the interstices.
The mosaic extens into the neighbouring Koutsogiannopoulou property to the west. It is decorated in sections according to the plan of the basilica.
Apse: the main motif is a scale pattern of which only a small part is preserved. The border has intertwined circles forming four-leafed motifs with triangles in the centre, alternating red and white. The border on the east side is a wavy band.
Central area: part of the border only is preserved, decorated with concentric circles with a rcoss at the centre, and then two rows of squares set within squares.
South side: the central passage has scale pattern, surrounded by borders with wavy line, concentric circles with central cross, and intertwined circles around rhomboid motifs. Black is used for outlines, and white, yellow and red to fill the motifs (fig. 2).
North side: the decoration is similar to that on the south side, with slight variations and embellishments. The tesserae are stone (of medium size) laid in mortar (opus tessellatum) (fig. 3).
Reviewing the iconography, many of the motifs used have parallels on the floor of the large Early Christian public building excavated on the properties of I. Philippopoulou and I. and E. Asimakopoulou, as well as on the floor found on the neighbouring Voutianidi property and those of the basilica on the Phournarakou plot at Gytheion. There are also similarities with the motifs on the late fifth-century floor mosaic on the Varvitsioti plot, and with the sections of floor found on the Roumelioti, Perganto and Dertili properties in Sparta. The division of the surface into zones which have their own unified decorative scheme is customary in Early Christian mosaics across Greek lands. The choice of severe geometric, aniconic motifs dominates the eastern Mediterranean as part of a general trend in the late fourth and early fifth centuries. However, purely geometric floor mosaics survived into the sixth century, characterised by careless design and execution (the ‘second Geometric period’) and are particularly common in Sparta. In this case the poverty of the design, the absence of zoomorphic representations, the limited colour range, and the accentuation of the circles and scales with the use of more than one colour, are characteristics of the early work of the workshop of Athens (first quarter of the fifth century). However, the simplicity and slackness evident in the linearity, simplification and irregularity of the design, the clumsiness of the execution, and the particularly limited colour range which creates a monotonous effect, combine to suggest that this is the work of a provincial craftsman in a local workshop. The floor likely dates slightly later, in the second half of the fifth century, contemporary with the floors on the Philippopoulou, Asimakopoulou and Voutianidi plots which offer the closest parallels for it. Mosaic production developed in Sparta through the fifth and sixth centuries, showing close links with workshops in the Aegean and mainland Greece.
Finds from the excavation include Roman and Late Roman pottery, metal items, marble and other stone members, glass vessels, glass paste tesserae and masses of glass, painted plaster, and seven bronze coins.
The plot lies 360m southwest of the Late Roman city wall, in an area where rescue excavation has revealed remains of Roman, Late Roman and Early Christian houses, mosaics, baths and tombs, underlining its importance in the city plan of that period.
Author
Catherine MORGAN
Bibliographic reference(s)
http://www.yppo.gr/0/anaskafes/pdfs/5_EBA.pdf.
Date of creation
2012-07-19 00:00:00
Last modification
2018-08-22 09:24:37
Picture(s) 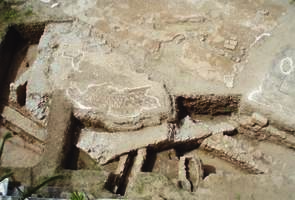 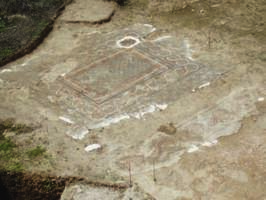 Fig. 2/ Sparta, Alkman Street. EC basilica: the south side and part of the central area with mosaic floor. 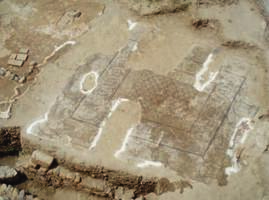