Key-words
Tools/weapons - Bone - Cave - Find Type - Material Type - Site Type
Type of Operation
Excavation - Research excavation
Institution
Ephoreia of Palaeoanthropology and Speliology for Southern Greece.
Toponym
Gythio
Linked Record
20002010
Report
Lakonis Cave. The Ephoreia of Palaeoanthropology and Speliology for Southern Greece report the completion in 2010 of a decade of excavation which revealed rich evidence of Middle and Upper Palaeolithic activity (fig. 1). Finds include stone tools (fig. 2), animal bones, hearths, and a Neanderthal tooth (the only such find yet published from Greece). The tooth was found in stratigraphical association with early Upper Palaeolithic material, a phase normally linked with the appearance of modern man in Europe. According to the excavators, this casts doubt on the traditional connection made between anatomical and cultural development during the Pleistocene. Specialist analyses of the tooth also give the first direct evidence of Neanderthal population movement, as they show that the tooth belonged to an individual who grew up in the interior of the country but moved to live in a coastal ecosystem. The Mani peninsula, which has many Palaeolithic sites, seems to have been one of the final refuges of the Neanderthals in Europe.
Author
Catherine MORGAN
Bibliographic reference(s)
http://www.yppo.gr/0/anaskafes/pdfs/EPSNE.pdf.
Date of creation
2012-07-19 00:00:00
Last modification
2018-08-22 09:24:37
Picture(s) 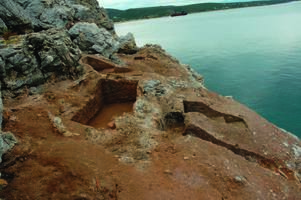 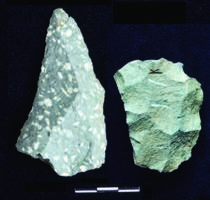