Key-words
Sanctuary - Production/extraction site - Cemetery - Domestic space - Dress and personal ornament - Mosaic - Figurine - Fortifications - Bath - Road system/waterway - Site Type - Find Type - Building Type
Type of Operation
Excavation - Rescue excavation
Institution
Ε’ ΕΠΚΑ.
Toponym
Sparte, Sparta, Lakedaimon, Lacedaemon
Linked Record
2010
Report
Sparta. The Ε’ ΕΠΚΑ presents an overview of the results of rescue excavation in the decade 2000-2010.
Early Helladic settlement has been found in the southwest part of the modern city and in the neighbouring area of Ag. Irini, close to the modern Magoulitsa stream. Levels rich in pottery and with a few remains of buildings have been revealed below Hellenistic and Roman constructions on the Laphogianni, Mavridi-Katsari, Dimitrakopoulou-Zachariadi and Sokou-Koutakou plots, among others. These remains are of particular significance in demonstrating that Sparta was occupied by the middle of the third millenium BC, with a particularly dense network of Early Helladic settlement in the Evrotas valley.
On a plot next to the so-called altar of Psyche, on the southeast edge of the city and very close to the west bank of the Evrotas, are Middle Helladic tombs and a chamber tomb of the period of Grave Circle B. The latter is orthogonal in plan with a side entrance, and corbelled walling. It contained bones from displaced burials and grave goods comprising pots, beads of semi-precious stones, and worked tusk from a boar’s tusk helmet (fig. 1) (indicating an elite grave).
Protogeometric, Geometric, Archaic and Classical pottery, architectural remains, and a significant number of tombs have been found in many parts of the city, but especially in the area of ancient Limnai and in the area south of the acropolis. Votive deposits also confirm the location of a number of Archaic and Classical sanctuaries.
Hellenistic remains are much denser. In the area of ancient Limnai, part of the city wall, with two orthogonal towers, lies north of the sanctuary of Artemis Orthia. An orthogonal multi-roomed building was excavated on the Georganta-Petrakou property, south of the acropolis.
For the Roman period, the large number of rescue excavations undertaken over the past decade has revealed luxurious residences with mosaic pavements, baths, workshops, and sections of roads and of the water and sewage systems.
Excavation of the Panagaki property and the adjacent Markou and Kourkouli plots revealed part of a large, luxurious villa urbana and a sanctuary deposit (fig. 2). Seven rooms are preserved, plus part of the internal colonnaded garden: several rooms had wallpaintings, and all had mosaic floors of the second half of the third century AD with prototypes of Spartan (and wider Greek) geometric compositions and figure scenes. The triclinium mosaic, depicting a revel with Dionysos between a Maenad, an actor, and followers of the god’s mystery cult, remains unique. A deposit beneath the house contained miniature vessels, terracotta female protomes (rare in Sparta and probably from acrolithic figures), and terracotta figurines of kourotrophoi, symposiasts, standing male and female figures (naked and clothed) and Artemis as huntress, several of which bear the coroplast’s signature. These finds suggest the existence in the area of a cult of Artemis from Archaic to Early Roman times.
Part of another villa urbana discovered on the Katsari property (fig. 3), has rooms arranged around a large courtyard. Both the rooms and the courtyard have floor mosaics with geometric motifs and figure scenes (Medusa and erotes riding dolphins). These floors were used for long periods, either with frequent repairs or with the insertion of parts of older floors when rooms were reconstructed or extended.
The discovery of parts of two organised cemeteries on the boundaries of the Roman city was important for the reconstruction of Spartan topography. Large parts of the north cemetery were revealed during the widening of the Sparta-Karava road, beside the line of the ancient road to northern Arkadia on the west bank of the Evrotas. A large number of tombs and underground funerary naiskoi (fig. 4) were excavated: around half have steps leading from the prothalamos to the main burial chamber, on the floor of which were built burial containers.The second cemetery was uncovered in the southwest part of the modern city in the course of rescue excavation in the Mavridi-Katsari and Dimitrakopoulou-Zachariadi plots and in public works on Vyzantiou Street (fig. 5). It was organised in two areas on either side of a road set on bedrock. Some 700 tombs were found. Pits, built cists, enchytrismoi of babies or infants, and underground funerary structures were found resting on or cut into bedrock. A quantity of successive burials, mostly tile graves, simple pits or enchytrismoi were investigated in the north part of the cemetery, inside the previous course of the Magoulitsas stream. The cemetery was used from the Late Hellenistic period until the fifth century AD, but the majority of graves date to the second and third centuries AD.
Tombs were also excavated in the area of Limnai, on the northeast edge of the modern city, and between settlement remains in various parts of the city. On the Sotiriou plot in the Limnai area, a Roman tomb contained the burial of a doctor together with his medical equipment.
Author
Catherine MORGAN
Bibliographic reference(s)
http://www.yppo.gr/0/anaskafes/pdfs/E_EPKA.pdf.
Date of creation
2012-07-19 00:00:00
Last modification
2018-08-22 09:24:37
Picture(s) 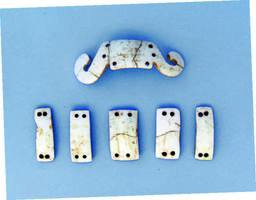 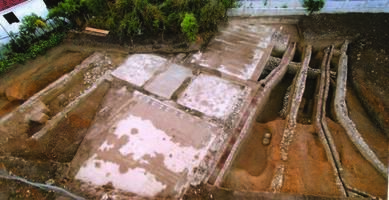 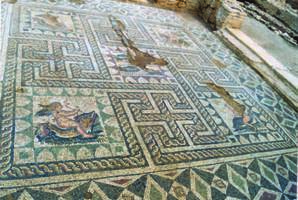 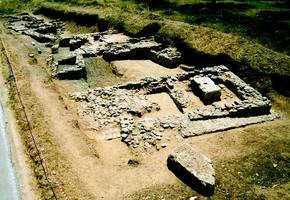 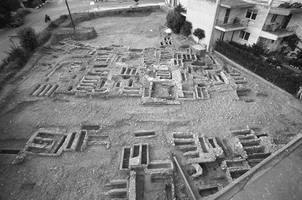