Key-words
Cemetery - Domestic space - Numismatics - Figurine - Residence - Fortifications - Site Type - Find Type - Building Type
Type of Operation
Excavation - Rescue excavation
Institution
ΛΓ’ ΕΠΚΑ
Toponym
Arta
Linked Record
20022010
Report
Arta (anc. Ambracia). The ΛΓ’ ΕΠΚΑ reviews the results of rescue excavations in the city. Finds include parts of the fortification wall, the east cemetery and the urban fabric of the city, with hundreds of silver and bronze coins, and portable finds such as grave stelai, ceramic vessels and figurines. The remains of houses, roads, drainage channels, often disengaged from later building phases dating into Byzantine and post-Byzantine times, represented chiefly by refuse deposits, were found on many building plots across the modern city. An indicative example is the discovery on the property of Trigono Oikodomiki EPE (fig. 1) of a drainage channel and much of a house with 11 rooms one of which contained a foundation deposit with 47 plain miniature vessels, a few figurine fragments, and ten gilded olive stones. The first phase of the house dates to the late Archaic period (late sixth-early fifth century) and it was destroyed and abandoned in Late Hellenistic times, noting also several post-Byzantine intrusions, such as a kiln and 20 rubbish pits. Traces of an Archaic house, part of a Classical and Hellenistic house, and Byzantine tombs complete the picture of continuous habitation on this plot.
In the southern part of the Papanikolaou property four neighbouring houses, separated by two intersecting drainage channels and passages, were occupied from the sixth century until the Late Hellenistic period (second century BC): these had a notable destruction deposit, and an open-air courtyard with a well. A Byzantine well and three rubbish pits were also found.
Part of the city wall discovered on the property of G. Yannoutsou was 5m wide, with two faces of dressed limestone masonry and a rubble, rock chip and soil fill inbetween. The discovered of part of the fortification and circuit road on the property of K. Panoutsou supplemented that part of the ancient wall previously known on the southeast side of the Byzantine kastro (the TEI or Ag. Paraskevi area).
Sections of the city cemeteries were also excavated. On the property of I. Vicha were 13 tombs of different types (fig. 2), a burial receptacle and part of a funerary peribolos, belonged to the east cemetery of the city: finds date from the early fifth to the first quarter of the second century BC. Rescue excavation also took place in that part of the Byzantine cemetery (discovered in 1992) which neighbours and perhaps belonged to the Church of the Parigoritissa. Forty-six Late Byzantine and later pit graves were found, oriented east-west and without goods, as well as a stretch of paved street.
Tombs on the Sacred Way/west cemetery (Kommenou property) were excavated in connection with works to unify and display the remains of ancient Ambracia from October 2010 onwards.
Author
Catherine MORGAN
Bibliographic reference(s)
http://www.yppo.gr/0/anaskafes/pdfs/LC_EPKA.pdf.
Date of creation
2012-07-18 00:00:00
Last modification
2018-08-22 09:24:37
Picture(s) 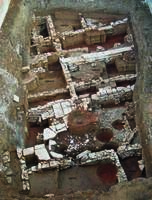 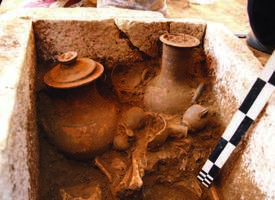 Fig. 2/ Arta, property of I. Vicha. A tomb in one of the cemeteries of Ambrakia.