Key-words
Numismatics - Metal - Sporting establishment - Public area - Production/extraction site
Type of Operation
Excavation - Research excavation
Institution
DAI.
Toponym
Archaia Olympia
Linked Record
1991199219931994199519971999 (1)199920002002200420052007200820092010201120122013201420152020
Report
Olympia. R. Senff (DAI) reports on the 2011 season.
In the southeast of the sanctuary, excavation to the east of the Southeast complex was extended to further clarify the stratigraphy and assess the extent of undisturbed levels in the direction of the Alpheus.
In the new sondage (Q 11.1) a backfilled trench from Dörpfeld’s excavation in search of the Stoa of Agnaptos near the entrance to the hippodrome (Fig. 1) ran diagonally through the top layer of loamy river sediments deposited during medieval flooding. Levels beneath contained many coins of the fifth century BC to the fourth century AD. Kiln spacers indicate the presence of a potter’s workshop in the vicinity. The firm, reddish floor surface is recessed slightly in the northern part, with several round holes, and is bounded on the west by a low wall-like construction of clay and pieces of shelly limestone. This area may also be linked to the workshop.
At the western starting line of the stadium, excavation explored foundations encountered in 1879. At the southern end of the line was a rectangular enclosure made of bricks and reused blocks from the starting line (Fig. 2). Within almost sterile earth was a 235kg lead weight found about half way down the shaft, dated to the early Imperial period by a barely worn coin of Domitian on the floor of the pit. It probably formed part of a starting mechanism operated by the weight dropping down the shaft.
A similar but less well-preserved system was found at the northern end of the starting line (Fig. 3). After damage, the pit here was casually repaired with half of a block from the starting line. The oblique cutting of its butt joint indicates that, as its southern counterpart, it directly abutted the adjacent block. The south wall of the pit contained half of a further starting block: rather than the usual 1.15m long foot-grooves it has two short, 0.34m long cuttings just as the end blocks of the eastern starting line. This block confirmed that a block is missing from the original arrangement of both ends of the western starting line, and that in this first phase the starting and finishing lines had identical terminal blocks. A block from the north wall of the pit probably comes from a Hellenistic predecessor of the Roman system. The date of the latter may be indicated by a coin of the Emperor Caracalla.
Author
Catherine MORGAN
Bibliographic reference(s)
Unpublished field report, DAI.
Date of creation
2012-07-18 00:00:00
Last modification
2021-03-11 12:54:47
Picture(s) 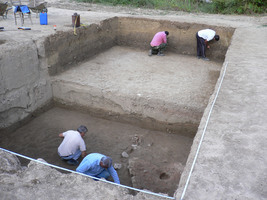 Fig. 1/ Olympia, south of the stadium. In the southwest corner of Q 11.1 (rear) Dörpfeld’s trench lies over Classical-Roman debris. 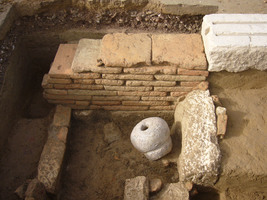 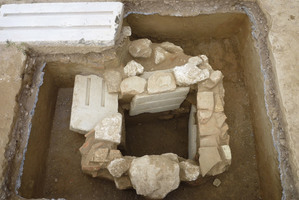