P. Meleti (25th EBA) presents a study of the Agia Anna cemetery, where a group of 40 graves was excavated in 2004 and a further 168 in 2009. All but 23 were oriented west-east (the exceptions being north-south), and most were robbed and in disarray. They were largely simple, homogeneous cist graves covered with multiple slabs, some in secondary use (with rare cases of slab lining and one instance - tomb 15 - of a partition between two burials). The simplest tombs had plaster floors (just three retained bare rock), but in most cases floors were carefully made of terracotta and marble tiles and re-used materials, with built head supports. Most tombs contained multiple, contemporary or successive, burials (up to nine), although the skeletal remains have not yet been studied. Very few fragments of inscribed stele were preserved. Around 1/3 of the graves contained offerings: most were domestic pots (60 vessels in total), usually one-two per grave (up to five in rare cases). Forms represented include round- and oval-bodied prochoes, oinochoae and lekythoi, cups and lamps. Glass vessels include three unguentaria. A small collection of personal items include rings (one with traces of textile), chain links, earrrings, a pendant, a spoon, belt clasps, bone and bronze pins, and nine coins. The few finds in the fill between graves include domestic pottery (amphorae and chytres), lamps, fragments of inscriptions, and pieces of iron objects including nails. Pottery from the cemetery is typical of Corinthian Early Byzantine burials of the fifth to seventh centuries, and lamps (from Crointh, Athens and Argos) are of similar date. The dense and tightly planned array of graves is probably part of a large extramural cemetery (the full extent of which is unknown), broadly dated to the sixth-seventh centuries and connected with the funerary Quadratus Basilica.
A particular concentration of remains at Kraneio, an area of 8.6ha east of the archaeological site of Corinth and northeast of Acrocorinth, includes one three-aisled basilica of the first half of the sixth century and what may be the remains of second. Excavation to date has revealed part of the fifth- or sixth-century Early Byzantine city wall plus part of the ancient city wall, and a further extensive cemetery immediately outside it. Inside the wall was a large bath complex: its halls (one apsidal) have marble wall revetments and marble clad benches around the walls. Early Christian architectural spoila were collected. After the abandonment of the complex, cist tombs were cut into the floor. A silo and walls above the floors indicate continuity of activity. The pottery consists mostly of Early Byzantine plain household ware, with some glazed wares of the 11th and late 12th-early 13th centuries. A smaller Early Byzantine bath complex presents a similar picture (fig. 2). The octagonal caldarium contained individual bath tubs in niches. In the Middle Byzantine period a new brick structure, probably a public building, was erected on the site. Pottery, architectural members and coins indicate a medieval phase which lasted into the 14th century (fig. 3).
The finds from Kraneio confirm the size and wealth of Early Byzantine Corinth. They reveal a previously unknown neighbourhood of the medieval city which is considerably more extensive than that excavated in the area of the ancient agora. Finds indicate continuity of activity from the Early Byzantine into the Middle and Late Byzantine periods.
Author
Robert PITT
Bibliographic reference(s)
http://www.yppo.gr/0/anaskafes/pdfs/25_EBA.pdf; P. Meleti, in K. Kissas and W.-D. Niemeier (eds), The Corinthia and the Northeast Peloponnese (Munich 2013), 161-167.
Date of creation
2012-07-04 00:00:00
Last modification
2018-08-22 09:24:37
Picture(s) 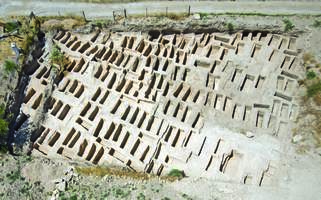 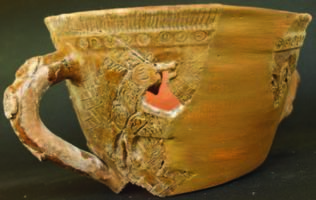