Key-words
Cemetery - Production/extraction site - Site Type
Type of Operation
Excavation - Rescue excavation
Institution
ΛΖ’ΕΠΚΑ.
Toponym
Korinthos, Corinth
Linked Record
2010
Report
Ancient Corinth. Olympia Odos. The ΛΖ’ ΕΠΚΑ reports the discovery, during the widening of the national road from Corinth to Patras, of an ancient quarry north of Ancient Corinth (figs 1-3). The few portable finds indicate that the quarry was used during the Archaic period, probably for the manufacture of sarcophagoi for the neighbouring Archaic and Classical cemetery, and for the Archaic city wall, part of which lies further to the west.
West of the quarry, excavation for a bridge revealed an Archaic cemetery (figs 4-5). Thirty tombs were excavated, four of which were child burials: nine larnax burials, seven cist graves, 12 pits with limestone cove slabs, and two pits without covers. Twenty-four graves were oriented south-north, five east-west, and one had been moved and its original orientation could not be determined. On the north side of this plot lay tomb 71 of the ΕΡΓΟΣΕ excavations, confirming that the entire ca. 50m-deep area between the road and the new high-speed railway line has been investigated.
Author
Robert PITT
Bibliographic reference(s)
http://www.yppo.gr/0/anaskafes/pdfs/LZ_EPKA.pdf.
Date of creation
2012-07-04 00:00:00
Last modification
2018-08-22 09:24:37
Picture(s) 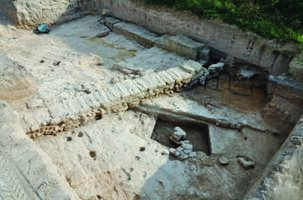 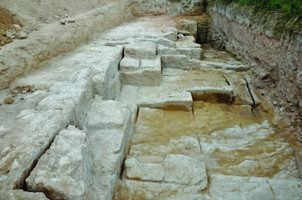 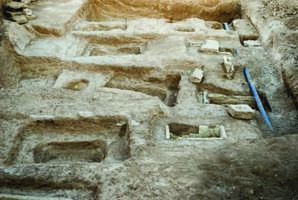 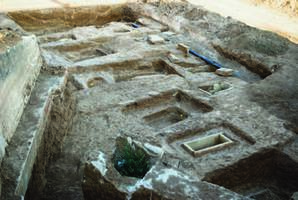